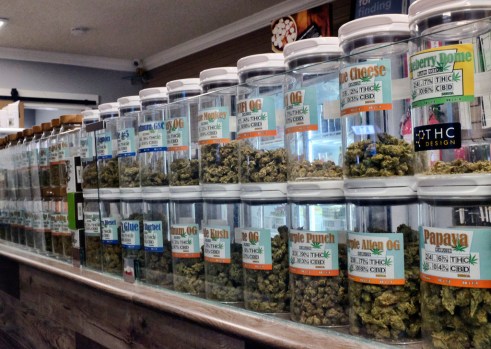 This Friday, Nov. 3, 2017 photo shows jars of medical marijuana on display on the counter of Western Caregivers Medical marijuana dispensary in Los Angeles. There will be no legal pot party in Los Angeles on Jan. 1. California kicks off recreational sales on New Year’s Day, becoming the largest state in the nation with legal cannabis for adults. But Los Angeles officials announced Friday, Dec. 22, 2017, that dispensaries in the city won’t be part of the celebration. The city won’t begin accepting applications to sell legal recreational pot until Jan. 3, 2018, and it could take weeks before those businesses are properly licensed with the city and state. (AP Photo/Richard Vogel, File)

A week after San Bernardino city leaders approved 16 commercial cannabis businesses, a local judge halted the licensing process for seven of them.

A Bud and Beyond also is alleged to be noncompliant, but it was not awarded a license last week.

Frangie’s decision grants those seven businesses the opportunity to contest the allegations presented in a lawsuit against the city filed by rejected applicant Washington LLC, which is headed by cannabis activist Stephanie Smith.

“I do have a concern,” Frangie said in court Wednesday, “for the nonparties here who think they have a permit, think they’ve been approved and … they start doing things when, ultimately, if (Washington LLC) is successful, they now have been damaged in going forward and getting other things they need to do to open.

While the temporary restraining orders halt the licensing process for some, businesses with no such compliance issues can continue the process, though it remains unclear how long that process will take to complete.

Frangie, who heard the case Wednesday in place of Cohn, who was on vacation, shared particular concern over the city violating its law as it relates to prohibiting such businesses from being close to schools, churches, community centers and other sensitive uses of land.

“If the permits were issued to businesses where they violated the ordinance on areas of sensitive use,” she said, “that would be sufficient for the court to stop the process, look at it and ask if there is a violation. The ordinance has a reason for having that (mandate).”

On Monday, Feb. 25, a few days after being arrested during a raid by San Bernardino police at her Pacific Palisades home, Smith sued the city to halt the licensing of the commercial cannabis businesses.

Smith, California’s self-proclaimed “cannabis landlord,” has pleaded not guilty and will next appear in court on Monday, March 4, for a settlement conference.

In the lawsuit against San Bernardino, Smith alleges corrupt practices involving a “pay for play” scheme.

San Bernardino city officials did not respond to a request for comment Wednesday.

Frangie’s decision in response to the lawsuit was the right call, Smith’s attorney, Ben Eilenberg, said.

“By issuing the temporary restraining orders (Wednesday),” Eilenberg added, “Judge Frangie inherently made a finding that we are likely to succeed on the merits of the case and we agree with her, and we hope Judge Cohn does too.”