California cities opted for legal weed to revitalize business. Will it work for this small, desert town?

BLYTHE LEGALIZED CANNABIS. HOPEFUL CANNABIS BUSINESSES CAME TO TOWN. A YEAR LATER, ONLY ONE HAS OPENED ITS DOORS. 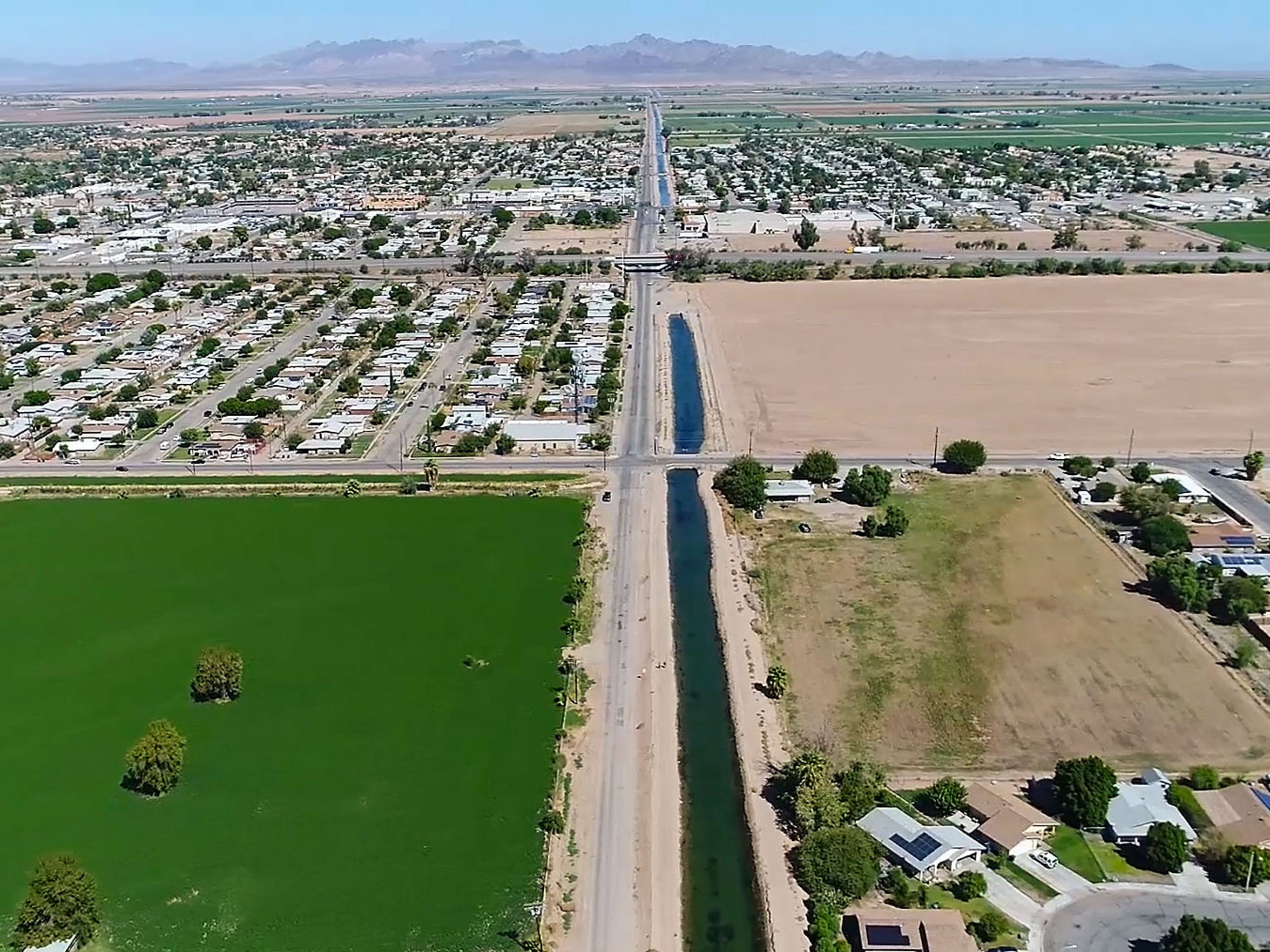 Farmland surrounds the city of Blythe near the California-Arizona border. For a moment, Blythe was the buzz of the weed business. Land is cheap and the city is equidistant from Los Angeles, Las Vegas and Phoenix.
(Photo: Jay Calderon/The Desert Sun)

For a segment of the population in Blythe, a farming town on the California-Arizona border, cannabis looked like the crop of the future.

The city of 19,486 was founded a century ago as a verdant agricultural hub. Today, farmers grow alfalfa, cotton and melons on the neat green squares of land that define the Palo Verde Valley.

But the population of the town is shrinking and the poverty rate is high. Blythe turned to pot two years ago, following the example of other inland communities in California, like Needles and Desert Hot Springs, which have each embraced legal marijuana as California prepared to regulate the sale of the drug to adults for the first time.

For a moment, Blythe was the buzz of the weed business. Land is cheap there and the city is equidistant from Los Angeles, Las Vegas and Phoenix. Forty cannabis businesses vied to put up a shingle in Blythe. Ten have city licenses. The largest proposal, a 2.5 million-square-foot industrial complex to grow and process weed called Palo Verde Center, likely would rank among the biggest campuses of its kind in North America if it gets built.

But the California cannabis industry has been off to a slow start since sales of adult-use marijuana debuted in January 2018, with tax revenue missing state projections and, at the local level, many cities choosing not to license cannabis businesses at all.

And Blythe’s cannabis industry hasn’t caught up to the vibrant pot business in the Coachella Valley to the east or Needles to the north. Two years after the city council decided to draft a city ordinance welcoming cannabis companies, only one company is open. The city’s two approved dispensaries are months away from their debuts. And lawsuits have stalled Palo Verde Center, the most ambitious cannabis real estate project in Blythe. It hasn’t even started construction.

‘We’re not the cure-all’

On a recent Tuesday afternoon, in a shopping center anchored by an Albertson’s grocery store, Trevor Farrage and his father, Mike Farrage, checked on the progress of a construction crew renovating a storefront that will become their future weed shop, The Prime Leaf. For now, the ceiling is exposed, interior walls are in the process of being framed and the floors are unfinished.

Mike, 59, grew up in Blythe. Both his father and uncle served as the city’s mayor. Now, Mike and Tom Farrage, son of the mayor of the same name, are two of The Prime Leaf’s four co-owners. Trevor, 29, will be its general manager.

Halby’s, a clothing an apparel store in Blythe, Calif., has been run by the same family since 1938. (Photo: Zoë Meyers/The Desert Sun)

“We’ve kind of seen a decline in Blythe through the years,” Trevor said. “Businesses not coming in, businesses moving out, that kind of thing. It’s always kind of been a goal of mine and my family members to find ways to help the community, to help Blythe get back to the way it was.”

One of the surviving businesses is a clothing and apparel shop, Halby’s, passed down through the same family since 1938. Its current owner, Joseph Halby III, is a city council member. (He is also a relative of the Farrage family. Halby’s grandfather and Mike’s grandmother are siblings.) Today the store sells uniforms for the staff of the two state prisons in Blythe, rents tuxedos and embroiders names and logos on hats and t-shirts. After the town’s Kmart closed in 2017, the store started stocking basic white underwear and socks.

“If I only did one thing, I wouldn’t make it,” Halby said.

Trevor, who left Blythe for Phoenix when he was about 10 years old, said he feels extra pressure to succeed in his hometown.

“I wouldn’t say that cannabis alone is going to save Blythe. If we are able to kind of jump-start more economy here and bring in other businesses so that we do have some restaurants in here, so that a movie theater does decide to come back here, a bowling alley decides to open up, things like that, to give these kids, people in the community something to do in Blythe — I think that’s what will save the community.”

Blythe has capped the number of dispensaries allowed in the city at two, and although The Prime Leaf was outranked by three other applicants, the council members ultimately awarded it a license because the business planned to renovate a building on the east side of Blythe, a part of town with vacant buildings city officials have been hoping to revitalize.

But later, at a contentious city council meeting, Mike asked to move The Prime Leaf’s license to the Albertson’s shopping center, saying it would have taken too long to open up a business on the east side of the city. The vice mayor scolded the company’s owners for switching their plans, protesting that it wasn’t fair to other applicants. The location change passed over his single dissenting vote.

On March 5, 2019, Trevor Farrage, left, and his father, Michael, discuss plans for The Prime Leaf, a dispensary that will open in Blythe, Calif. (Photo: Zoë Meyers/The Desert Sun)

“We have to show them that they didn’t make a mistake,” Mike said.

He still hopes to expand into east Blythe. In the meantime, renovating the shopping center storefront will cost about $200,000 and take until June.

The first weed business in Blythe

A short drive from The Prime Leaf, the owner of the first cannabis company to open in Blythe is operating out of a nondescript brick and stucco building attached to the back of a pizza shop.

Travis Pollock, 36, opened Flora Holding Group at the beginning of January. For now, his business is just packaging and distributing cannabis grown by other companies, but it has a license to make its own cannabis products, like marijuana hash and rosins. 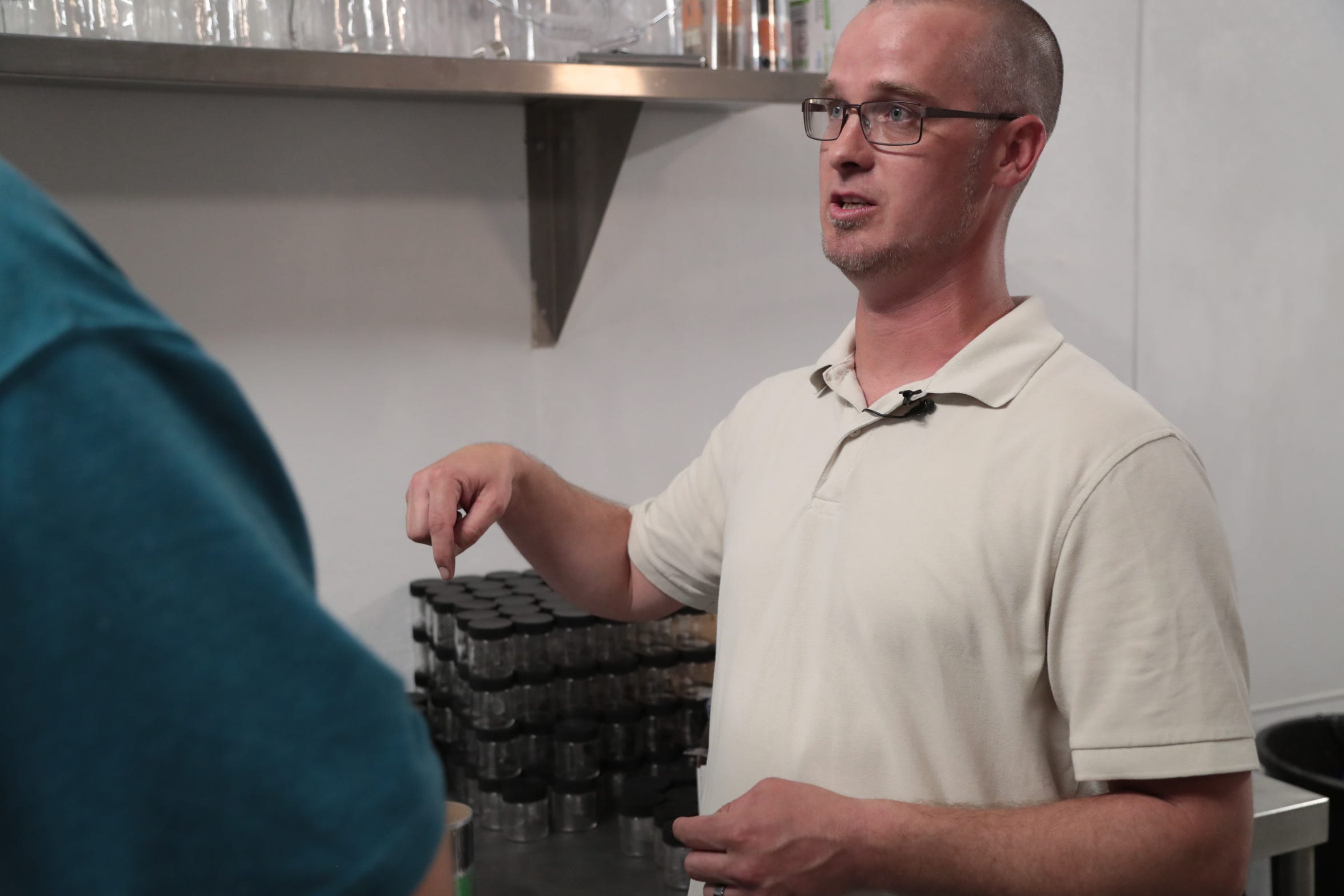 Pollock got his start in the weed business in Colorado, then moved to Arizona when the state legalized medicinal cannabis. He decided to try to win a license in California next and found his way to Blythe, a place where he can still get home to Phoenix in time to take his kids to softball practice.

But Pollock had been betting that he wouldn’t be the only shop in town. If other companies in Blythe were growing or processing weed products, Pollock reasoned, Flora could deliver them to retailers elsewhere in the state. Instead, Pollock has found himself distributing marijuana flowers grown in places like Los Angeles and Long Beach.

“It’s just been unfortunate to see that there isn’t anybody else who’s even close to getting through the process to be up and operating,” he said.

And because he hasn’t been awarded his own retail license in Blythe, Pollock is applying for a retail and cultivation licenses somewhere else: Unincorporated Riverside County, just outside Blythe’s city limits.

‘We really want to be the catalyst’

This isn’t where Steven Gregory thought he would be today.

When the CEO of Palo Verde Center first saw Blythe, he felt like “when Brigham Young saw the Great Salt Lake,” he said in an interview with The Desert Sun last year.

Blythe, he decided, was the perfect place to build a massive complex for cannabis businesses. The plan was to build a 2.5 million-square-foot industrial development and either sell or rent units inside of it to other companies to grow, manufacture, distribute and test cannabis. Because the land is so cheap, Gregory said, he’ll be able to undercut the cost of rival real estate developments in the Coachella Valley by a third.

Before Palo Verde Center had even received approval from the city council, Gregory and his colleagues held a job fair, luring a reported 838 candidates to an event at the local Hampton Inn.

Gregory and his business partners bought the land for the development last winter, purchasing 126 acres total.

Gregory had hoped that by this point, he would have finished construction on the first of the 17 buildings in the complex and that the remaining space, although not yet constructed, would have been sold or leased to weed companies.

The plan started to go awry in the summer. In June, Gregory and his business partners were sued by a man claiming Gregory and his allies reneged on their promise to give him a one-third interest in the real estate they purchased in Blythe. Then, in October, Better Neighborhoods Inc., an Irvine-based company that advocates for what it calls “sensible development” by appealing real estate developments across the state, sued the city under the California Environmental Quality Act, effectively blocking the Palo Verde Center. A third lawsuit from the Laborers’ International Union of North America Union No. 1184, filed a few days later, challenged the development on the same grounds.

“Needless to say, that was a roadblock,” Gregory said.

For one thing, about half of the 75 companies that were interested in moving into Palo Verde Center backed out, Gregory said. Some decided to move into another real estate development. Others decided not to jump into the cannabis industry at all.

And although Gregory said lenders have committed to fund the early stages of designing and building Palo Verde Center, until the lawsuits are out of the way, the funders are holding onto their money.

Gregory thinks some people in Blythe see his project as “another big promise that didn’t happen.” But he hopes residents will be patient.

“We’re sorry that there aren’t jobs for you today, but it’s coming,” he said. “If I were unemployed or underemployed, and it hadn’t happened yet, I would be disappointed, too.”

The first lawsuit is already settled, Gregory and the plaintiff each confirmed, and was ordered dismissed from court on March 13. Gurjit Singh, an attorney for Better Neighborhoods, declined to comment. Richard Drury, an attorney representing Local 1184, did not return messages seeking comment.

Gregory is optimistic all the litigation will be behind him soon.

“This project is going to happen, and we hope upon hope that this really is everything that we promised and said that we would provide to the city of Blythe,” Gregory said. “We really want to be the catalyst that turns this city around.”