The merchants of El Paseo, the posh Palm Desert shopping district 120 miles east of Beverly Hills, like to market their neighborhood as an inland answer to the cluster of designer boutiques along Rodeo Drive.

But lately, it’s not Louis Vuitton handbags that have the Palm Desert shopping destination buzzing.

The retail corridor’s first marijuana shop, The Leaf, opened in mid-March in a space that used to be a family-owned menswear boutique. On the inside, the store resembles a jeweler, with glass cases displaying bongs.

Paul Cotterell, the general manager of The Leaf, said the shop’s managers “wanted to be on the elegant side, to meet the criteria of what an El Paseo address looks like.”

The opening of a pot shop in a setting like El Paseo is just one of the ways cannabis is becoming a more ubiquitous part of American retail, from corner pharmacies to luxury boutiques. CVS, one of the world’s largest drugstore chains, is now selling lotions and creams that contain CBD, a nonpsychoactive ingredient in cannabis. And Barneys New York is opening what it calls “a luxury head shop” on the fifth floor of its Beverly Hills flagship, hawking gold rolling papers and weed-inspired jewelry for its wealthy customers.

But not everyone is pleased about a cannabis-infused El Paseo.

A rival dispensary permit applicant filed a lawsuit against the city in October 2018 to challenge the decision to award The Leaf a permit, claiming The Leaf was given preferential treatment as a result of its owners’ political influence. The lawsuit was withdrawn in December 2018. The Leaf’s owners and city officials claim the lawsuit was totally without merit.

And some locals have raised questions about whether The Leaf will fit into the city’s prized retail corridor and attract fashionable country club-goers. 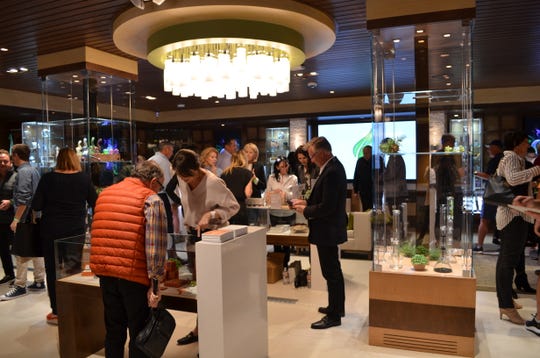 The Leaf is a new venture for its part-owner, R.D. Hubbard, known locally as the chairman of nearby Bighorn Golf Club. According to the business operations plan The Leaf submitted to Palm Desert in 2017, Hubbard spent $1.7 million to purchase the El Paseo property and planned to spend an additional $1.8 million on renovations.

“He had his sights on doing something in the cannabis industry and, being as one of his hometowns is Palm Desert, it made sense for him to try to develop something here,” Cotterell said.

In its application, The Leaf projected that it would make more than $8 million in sales in its first year, growing revenue to $12 million by its third year in business. Sales revenue for The Leaf could mean tax revenue for Palm Desert, which set a tax of up to 10 percent of gross receipts on cannabis retailers in December.

Cotterell worked at Bighorn as its food and beverage manager and hopes to bring some lessons with him into the cannabis industry. In a restaurant, Cotterell said, you would never want customers to wonder when their glass of water might be refilled. But when he visited some dispensaries, Cotterell would enter the retail floor without a clear idea of where to start shopping.

“I’ve seen dispensaries where you’re let into a space and you don’t really know what direction to take,” he said.

To avoid similar befuddlement at The Leaf, hosts greet customers as they enter, show them around and help them scroll through selected products on a tablet computer, he said. Cotterell said the shop might have as many as 11 employees working on the 3,000-square-foot retail floor when the business is busiest.

“We’re seeing a lot of the older demographic, and being that they’re newcomers, we want to make sure … that they understand the flow, because this dispensary world is totally new to them,” Cotterell said. 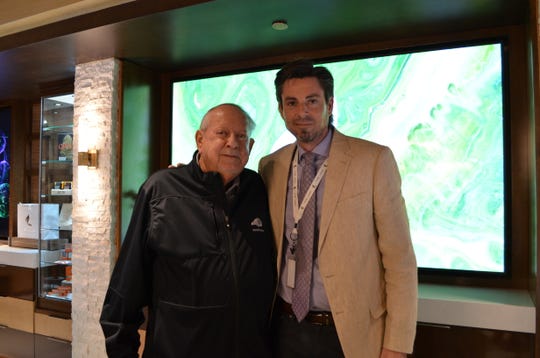 The Leaf isn’t the only cannabis shop in Palm Desert, one of five cities in the Coachella Valley that have welcomed dispensaries. Palm Desert has awarded six retail cannabis permits and only allows one cannabis shop on El Paseo, which means The Leaf does not have any competitors on its block.

“The cities and the municipalities have done a really good job, especially Palm Desert, in making sure they don’t oversaturate licenses,” Cotterell said. “And that bodes well in our favor because the second you open the door to 20, 30 dispensaries, there’s ones that are going to just die on the vine.” 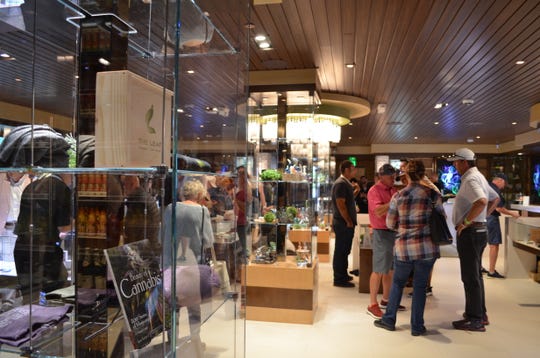 But the controlled market has also triggered pushback.

In October, Denise Roberge, the owner of Denise Roberge Jewelry on El Paseo, sued Palm Desert, alleging city officials treated her unfairly when they denied her application for a cannabis dispensary on El Paseo in favor of The Leaf.

Roberge has disagreed with the Palm Desert City Council in the past, including in 2008, when the council voted to prevent Roberge from hosting live music at a restaurant she ran on El Paseo.

The lawsuit, which Roberge dropped in December, alleged that companies and people related to R.D. Hubbard contributed tens of thousands of dollars to Jan Harnik’s political campaigns “to manipulate the process” to win a cannabis permit on El Paseo.

While some of Roberge’s claims in the now-moot suit, like campaign contributions to Harnik, check out, others don’t.

Roberge claimed that Harnik appointed an attorney representing The Leaf, Rob Bernheimer, to serve on a committee that advised the city on its cannabis regulations; that Hubbard was given “non-public information” allowing him to purchase a property eligible for a dispensary before the city had formally approved which zones of the city would permit cannabis retailers; and that the process city staff used to score the applications for cannabis dispensaries unfairly penalized her application and rewarded The Leaf’s application.

Eric Ceja, the city’s principal planner, said the city initially created a committee to discuss cannabis composed of city staff, planners, councilmembers and two cannabis delivery operators, and that Bernheimer started attending meetings of the committee when they were opened to the public. Harnik said she did not place Bernheimer on a city cannabis committee. She said she recused herself from an October 2017 vote to adopt the city ordinance lifting the ban on cannabis dispensaries because Bernheimer, who co-founded the communications firm CV Strategies with Harnik’s husband, Brian Harnik, rents an office from the couple. She called the lawsuit “hostile and without merit” and said it was an attempt to harm her and Councilmember Sabby Jonathan in the November 2018 election.

Campaign finance records show that the contributors to Councilmember Harnik’s 2018 campaign for county supervisor include people connected to The Leaf and Hubbard.

Edward Burger, The Leaf’s president, said campaign contributions to Harnik “had nothing to do with the possibility of getting a retail dispensary license.” He said he had no inside knowledge about how the city planned to restrict cannabis businesses at the time the El Paseo building was purchased, which was prior to the adoption of the cannabis regulations.

Palm Desert City Council, in a response filed in court, denied that it had treated Roberge unfairly and denied that Hubbard received non-public information. The council response said scoring decisions “were fair, reasoned, and lawful, and within the scope of proper discretion.”

In an interview, Roberge said she chose to dismiss the lawsuit because the judge assigned to the case, James T. Latting, previously worked at the law firm Roemer & Harnik LLP alongside Brian Harnik.

“Judge Latting is owned by Harnik,” she said. “We decided there’s no way that we’re ever going to win that.”

Marita Ford, a spokesperson for Riverside Superior Court, said judges cannot comment on cases. Councilmember Harnik said Roberge could have had her attorney ask for another judge to be assigned to the case, but “chose to slander (Latting).”

Cotterell said The Leaf won its permit “fair and square,” on the merits of its application.

And now, The Leaf is open for business.

On its grand opening March 14, the shop was humming with curious visitors, some wearing polo shirts and baseball caps as if they had just stepped off the golf green.

They peered into glass display cases and peeked into a refrigerator stocked with cannabis-infused beverages. In the back parking lot, a DJ played Willie Nelson’s “Roll Me Up and Smoke Me When I Die.”