Inside Desert Politics: Cannabis remains a high priority locally and in state legislature

Hi, subscribers! Desert Sun political reporter Sam Metz, here. I’m subbing in for your regular Inside Desert Politics host Marie McCain. In this week’s edition, I’m taking a look at what’s happened in the cannabis industry in California since the businesses started selling recreational cannabis in 2018.

California cannabis users may be able to smoke, vape or eat edibles in celebration of their high holiday 4/20, but in the second year that recreational cannabis has been legal in California, the state is still fighting black market activity, deciding on the right tax rates and trying to create a working licensing system.

When Proposition 64 was on the ballot in 2016, cannabis fans in California, mainly Democrats, said legalization would bring the state needed tax revenue and shrink the black market. But tax revenue has fallen short of expectations and, according to the Associated Press, about 80% of sales continue to take place on the black market.

Because cannabis sales remain illegal federally, states that have legalized it have butted heads with the federal government. And now, in addition to the feds, cities and counties are also upset with California for how it’s regulating the industry.

A majority of the state, 57%, voted in favor of legalization when Prop. 64 was on the ballot in 2016, but 77% of cities have yet to issue permits for either cultivation or sales.

Earlier this month, 25 counties and cities, including Riverside and Temecula, sued the state’s Bureau of Cannabis Control to overturn an earlier court decision that allowed delivery services to operate throughout the state.

In the lawsuit, the cities said allowing delivery services like WeedMaps to operate regardless of local ordinances violated the principle of local control and violated the law voters passed with Prop. 64. “Under the measure, cities and counties could regulate nonmedical marijuana businesses,” the 2016 ballot measure read. “Cities and counties could also completely ban marijuana-related businesses.”

Delivery is a big business and, in Sacramento, it’s starting to act like one. Three pro-delivery associations spent hundreds of thousands lobbying the state government during the 2017-2018 legislative session and, with a slew of cannabis bills currently under consideration in the legislature, their efforts will likely continue.

This year, cannabis-related legislation is a high priority in the legislature. Lawmakers are considering bills that would speed up the licensing process, change the way the substance is taxed and change how businesses can use banks. Here are a few bills currently under consideration:

AB 1356 proposes requiring cities and counties where Prop. 64 won a majority of the vote to grant one cannabis businesses licenses for every four retail liquor licenses. The bill’s an attempt to address the slow pace of licensing but local control advocates, including the California League of Cities, have come out against the bill, saying it infringes on local control.

AB 286 proposes reducing the cannabis excise tax in order to curb black market activity. The bill would lower the state tax from 15 to 11% by 2022 and eliminate the cannabis cultivation tax entirely. 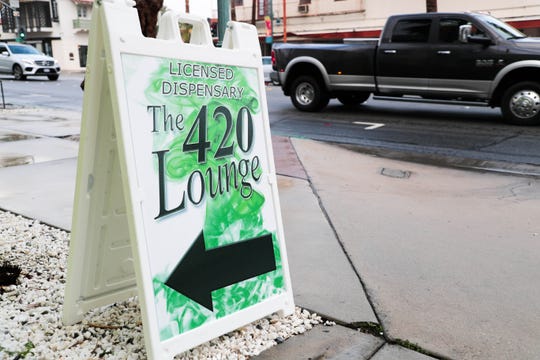 The Coachella Valley has seen the rise of pot lounges, cannabis music festivals and giant cultivation centers and we’ve reported on it all.

Desert Sun business reporter Amy DiPierro has covered the rise of the industry in the Coachella Valley since legalization. In a March story about cannabis licensing, she reported that more than 10,000 temporary licenses were set to expire before September. Uh Oh. The pace of licensing is already slow and all the expirations could further drive business owners who’ve already sunk money into cannabis to the black market, she reported. She has also reported on how cities hoping cannabis can bring them needed economic activity and tax revenue have been disappointed. In a story about Blythe, she found that despite the city’s efforts, only one dispensary has opened since the city started issuing permits two years ago.

Watchdog reporters Shane Newell and Ricardo Lopez have each reported extensively on cannabis in the cities they cover. In February, Newell reported on a cannabis-focused music festival held on Mike Tyson’s ranch in Desert Hot Springs, where he plans to build a 412-acre resort and cannabis research facility. In March, Lopez reported on Coachella’s efforts to refine its cannabis ordinances to attract new dispensaries and become a cultivation hub.

Education reporter Joe Hong reported that cannabis excise tax revenue has fallen short of projections in the 2017-2018 state budget, squeezing school districts. The state had intended to use the revenue to fund education-related initiatives but local school districts are still waiting. “We’re expecting to see those funds,” a local superintendent told Hong. “But we haven’t yet seen anything from the state.” 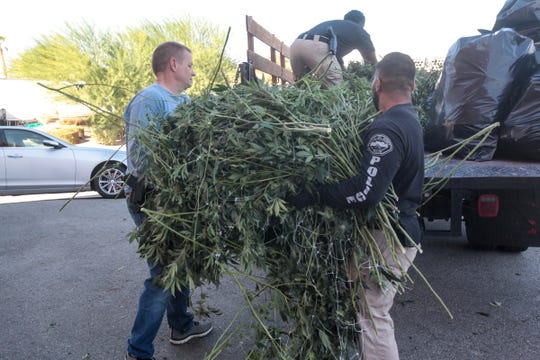 Elsewhere on the web

Earlier this week, The Information’s Zoe Bernard reported that cannabis vaporizer company PAX Labs is nearing the end of a financing round in which they could raise $400 million, which would value the company at around $1.3 billion.

Politico’s Paul Demko reports on how every Democrat running for president, including California Senator Kamala Harris, supports some form of cannabis legalization.

In Wired, Amanda Lewis reports on how licensed cannabis businesses, who allied with delivery services during California’s legalization campaign, are upset the delivery service Weedmaps has allowed unlicensed businesses to operate on their platform.