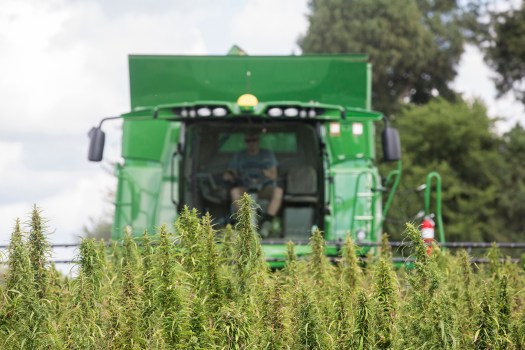 Will Kleidon hoped to be growing hemp in his California hometown of Ojai by now.

It’s even in his company name: Ojai Energetics.

But, for now, Ojai is one place he can’t grow. California regulators haven’t created a legal path that will let farmers grow commercial hemp. So Kleidon has been forced to work with a farm in Oregon to source hemp for his company’s therapeutic elixirs, oils and gels, as he waits for California to get its hemp program up and running.

“If they don’t resolve it soon, we’re going to miss another planting season,” he said.

It’s been two and a half years since Californians voted to legalize both the marijuana and hemp varieties of the cannabis plant. And it’s been more than three months since industrial hemp — defined as having have less than 0.3 percent of THC, the compound in cannabis that makes people high — became legal at the federal level.

But while California got licensing in place to let legal marijuana sales start Jan. 1, 2018, regulators still haven’t set up a system to let farmers grow commercial hemp legally. And no one can say when the program will be running, with the window to plant crops for a 2019 harvest rapidly closing.

“I’ve never seen a mess like this in all my years in working with other states on their hemp programs,” said Chris Boucher, who started off with a hemp clothing shop in Costa Mesa in 1990 and is widely viewed as a pioneer of the legal hemp industry.

Hemp programs are booming in places as diverse as Nevada and China. Plant material is being converted to energy-efficient construction materials, durable fabrics, nutritional foods and biodegradable plastics. And hemp flowers are being used to extract CBD, a compound in the cannabis plant sold as having therapeutic benefits without making consumers high.

Just last week, both CVS and Walgreens have announced plans to stock topical CBD products made from hemp in hundreds of their stores nationwide.

With its vast farmland, ideal growing climate, large population and established agricultural infrastructure, California’s hemp industry alone is projected to be worth several billion dollars. That’s why at least 300 farmers have expressed interest in growing hemp here once the state allows it to move forward.

“California has fought long and hard to legalize industrial hemp, and we’re in last place,” said Boucher, who runs Farmtiva hemp farm. “We’re all just baffled at how California has really fumbled this and put our farmers way behind the spectrum.”

The California Department of Food and Agriculture, which oversees hemp farming in California, declined several requests for interviews about the status of the program. Department spokesman Steve Lyle said via email that the state hopes “to have regulations to share next month.”

Meanwhile, some investors and product manufacturers are at least temporarily leaving California. But that’s not an option for farmers who’ve invested and planned to fill their fields with hemp this year — and who may have contracts with hemp product companies on the line.

If the state doesn’t let farmers start registering to legally grow commercial hemp soon, some are ready to take advantage of a loophole that lets them still grow the crop under the auspices of research. Others, industry experts say, may create an entirely new illicit market for hemp.

“By not acting,” said John Miller, a Carlsbad-based hemp industry consultant, “the state is inviting criminality.”

Hemp was a popular agricultural crop from the time the United States was founded until the turn of the 20th century. That’s when belief in the dangers of marijuana began to mount, driven largely by rhetoric from community leaders who used the drug as a way to demonize the new wave of Chinese and Mexican immigrants. In 1937, the U.S. government officially linked hemp with marijuana, making it illegal to farm any variety of cannabis for 80 years.

The door for American hemp farmers started to crack open seven years ago. Colorado and Washington voted to legalize marijuana in 2012 and, at the same time, allow hemp cultivation.  A year later, the first open hemp harvest in nearly eight decades took place in Colorado, and hemp farmers in Kentucky and a few other states soon followed suit.

Gov. Jerry Brown signed the California Industrial Hemp Farming Act in 2013. But the bill included a line that said farming could only take place if “authorized under federal law,” rendering California’s approval of hemp essentially moot.

The federal Farm Bill in 2014 said states could permit hemp cultivation if it was for research. Last year, Boucher and at least five other hemp farmers grew crops in conjunction with California research organizations. Then, in December, President Donald Trump signed a Farm Bill that simply removed hemp from the federal list of controlled substances, paving the way for hemp farming across the country.

New York has dedicated $10 million to hemp research, with a Canadian company signing a $150 million deal to cultivate hemp there. Colorado’s governor mentioned hemp in his State of the State address. Kentucky’s governor has posed for pictures at local hemp farms. But most big players in California are still waiting for the state to support the industry and set up a system for sanctioned commercial cultivation.

Since the passage of Proposition 64, in November 2016, the state has formed an Industrial Hemp Advisory Board to recommend specific regulations and fees for the industry. And, in October of 2017, that group submitted to the state its first set of draft rules, according to Lawrence Serbin, who chaired the board and whose Paramount-based company, Hemp Traders, is perhaps the country’s largest importer of hemp products.

But the advisory board didn’t hear back from the state until spring 2018, Serbin said, when they were told to revise the proposed fees. The group submitted an updated plan, which — much like other states with legal hemp programs — calls for farmers to fill out a one-page registration form and pay an annual fee of $900 to their county agricultural commissioner. They can then plant as much hemp as they want, so long as they submit to testing before harvest to confirm that their plants have less than 0.3 percent THC.

That plan was submitted last May and it’s still under review by state regulators.

“We were expecting that process to take three months and it dragged out the entire year,” said Brian Webster, a Bay Area hemp industry consultant who’s hosting the California Hemp Investment Forum in San Francisco next month.

The Office of Administrative Law has until Wednesday, April 3 to approve the rules and fee structure or recommend further changes.

Anticipating the plan will be approved, some hemp farmers are hoping to head down to their local county agricultural commissioner’s office this week to pay their $900 fee and register to get seeds in the ground.

Imperial Valley — where Boucher and others have farms — plans to be ready to register hemp growers as soon as the state approves the process, according to County Agricultural Commissioner Carlos Ortiz.

Counties can’t ban hemp. But they can tack on their own regulations and fees to register hemp farmers, and they can pass a 45-day moratorium on growing hemp while they work those details out. Those policies would have to be approved by each county’s board of supervisors, which can take weeks or months. And several other Southern California agricultural commissioner’s offices said they haven’t yet started that process as they wait on more information from the California Department of Food and Agriculture.

When pressed for more information about that process, Lyle, with the state agriculture department, would only say they’ll “know more” after the Office of Administrative Law approves the plan.

As it looks like it might take California three years to do what other states have done in a few months, some hemp industry supporters said they can’t help but wonder whether there’s any truth to long-held conspiracy theories about powerful competing industries such as paper, cotton and marijuana helping to shut them out.

One reason is because hemp can also produce valuable CBD, but with no special taxes and nowhere close to the same regulations faced by marijuana growers. That’s got some marijuana industry players eager to jump ship to hemp once the floodgates open.

Another reason marijuana supporters fight hemp is because some varieties of hemp produce pollen that can travel for miles and contaminate marijuana fields by diluting their crop’s THC content. But hemp supporters point out that problem can be controlled through zoning and by using only feminized seeds, meaning the two industries should be able to coexist.

As he’s dug into reasons for the delays, Boucher said he can only come to one conclusion: “The state has not made this a priority.”

The Bureau of Cannabis Control, which oversees marijuana, hired dozens of people in its first couple of years. But the state only recently dedicated one staff member to the regulation of industrial hemp.

Funding is likely an issue, Serbin pointed out, since hemp won’t produce tax revenue the way marijuana eventually could.

A number of complex questions about legal hemp remain unresolved.

Law enforcement, for example, has a hard time telling the difference between marijuana and hemp, with no roadside test to measure THC levels. While hemp for fiber is grown dense and tall, hemp grown for CBD can look much like bushier marijuana plants. And they all smell the same, leading to seizures at legal hemp farms or as trucks haul hemp deliveries across state lines.

State and federal law also still says CBD extracted from hemp can’t be added to any products that can be consumed by people or animals, even though such products are widely available online and at health food stores across the country. That rule has triggered some raids, with authorities pulling CBD products off the shelves in Costa Mesa, Victorville and other places.

Assembly Bill 228 would remedy that by making hemp-derived CBD a legal ingredient in California. The bill — authored by Assemblylwoman Cecilia Aguiar-Curry, D-Winters — has unanimously passed two state committee hearings, but it has yet to come to the floor.

There’s also a lingering question about the types of seeds that hemp farmers are legally allowed to plant.

The California Crop Improvement Association, a nonprofit through UC Davis that certifies seeds for use in California agriculture, has approved a list of hemp seeds for cultivation. But the list was created before emergence of a CBD market, according to Alexander Mkandawire, who oversees hemp issues for the association. That means seed varieties that California farmers are most interested in pursuing aren’t yet approved. There’s also concern, Mkandawire said, that there isn’t enough stock of approved seeds for California farmers.

Mkandawire said he’s heard the Department of Food and Agriculture might relax the rule on approved seeds for this year, but he hasn’t seen anything to that effect in writing.

Hemp supporters are wondering whether they can get some type of temporary permit to start farming now. The state has issued temporary and provisional permits for marijuana farmers so they could keep working while pursuing annual licenses but, to date, no such help has been extended to hemp farmers.

Meanwhile, Native American tribes in California seem to have a green light to grow industrial hemp without state or local approval.

Under the latest Farm Bill, sovereign tribes can oversee their own hemp cultivation programs. That gives them an advantage in that they can adopt regulations quickly and get to market faster than hemp companies that need to operate within the state’s regulatory framework.

The Iipay Nation of Santa Ysabel, in San Diego County, is eyeing hemp farming on some portion of its 15,000 acres, according to Dave Vialpando, who heads up the Santa Ysabel Tribal Cannabis Regulatory Agency.

He expects other tribes in need of steady revenue will be lured by the chance to get a piece of the cannabis market without the regulatory headaches that come with marijuana.

“It’s going to be a lot of jobs and a lot of revenue for a lot of people,” Webster said. “We just have to get going.”