SAN FRANCISCO — David Dancer is a 48-year-old marketing executive who has worked for big brands like Charles Schwab and Teleflora. A year ago, he got a call from a recruiter for a different kind of company: MedMen, a cannabis retailer that has been called “the Apple Store of weed.” The opening was for a chief marketing officer. He took it.

One of Mr. Dancer’s early projects was a slick two-minute video by the director Spike Jonze that begins with an anecdote about George Washington as a hemp grower, a staple of dorm-room conversation. It concludes with a suburban couple coming home with a bright red bag of legally purchased pot, symbolizing “the new normal” — an ending that, like his own career twist, seemed improbable not long ago.

“It can and should be a part of anyone’s everyday life,” Mr. Dancer said in a recent interview, sounding very much like a man who has been hired to do marketing.

Although cannabis remains illegal on the federal level, 33 states now allow its sale at least for medical purposes. Ten of them, including California, have legalized recreational use. And as new markets open and capital continues to flood in, the cannabis industry has become, by some measures, one of the country’s fastest-growing job sectors.

The jobs range from hourly work at farms and stores to executive positions. They also span the country. Columbia Care, a medical cannabis company that is based in New York and has 500 employees, has indoor farms and manufacturing plants in Massachusetts, Delaware, Florida, Illinois, Arizona and the District of Columbia. 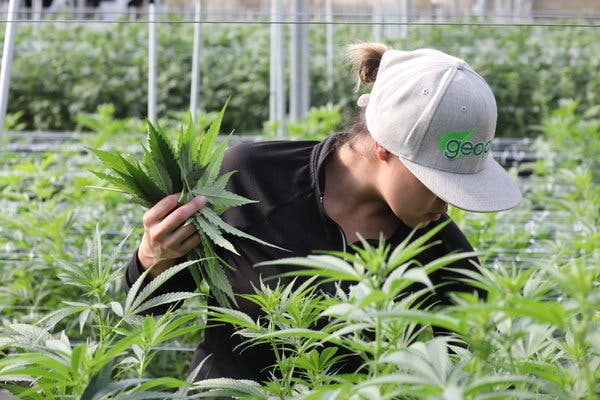 It’s hard to know exactly how many jobs there are in the legal cannabis business. The United States Labor Department collects data from cannabis farms and retailers, but does not provide figures for the industry. Still, listings for cannabis-related positions have rocketed to the top echelon of the fastest-growing-job categories on sites like Indeed and ZipRecruiter.

Julia Pollak, a labor economist at ZipRecruiter, said the company’s data put the number of cannabis jobs nationwide at 200,000 to 300,000. Most of those jobs are on the lower end of the pay scale, consisting of rote agricultural work like plant trimming ($10 to $15 an hour) and “budtenders” (about $25,000 a year), who help customers decide what kind of cannabis they want and then weigh and bag it.

But as the industry expands, there has also been a strong demand for better-paid positions like chemists, software engineers, and nurses who consult with patients about using cannabis for anxiety and other medical conditions.

“The early signs are that this will grow rapidly,” Ms. Pollak said.

A few years ago, navigating the marijuana industry felt like a journey to the fringes of legitimacy. Cannabis-prescribing doctors set up shop in strip malls and record stores, or consulted with patients over brief video chats. Dispensaries were often in barred storefronts, and their employees had to engage in the charade of scolding their prescription-bearing customers if they talked about sharing purchases with friends. 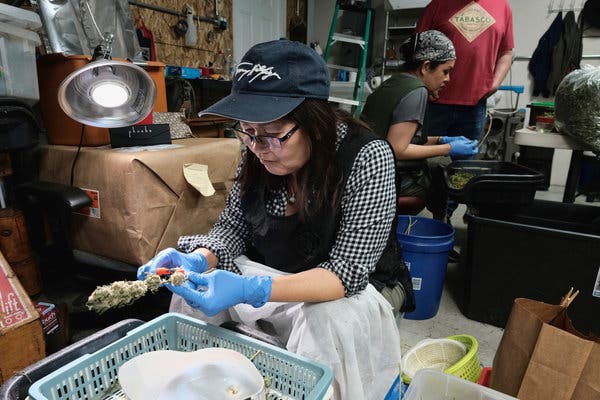 Now cannabis dispensaries occupy brightly lit spaces on prime retail strips that have showcase buds in glass cases and tinctures in small squeezer bottles, along with $80 pot lotions and $20 bars of pot soap. Six months ago, Canada became the first major world economy to legalize recreational marijuana use, and several dozen cannabis stocks — many for companies that are American in all but name but unable to list in the United States — now trade on the Canadian Securities Exchange.

Vivien Azer, a managing director at Cowen in New York, became the first major Wall Street analyst to follow the cannabis industry in 2016. She has since been joined by competitors at Jefferies and Piper Jaffray, and cannabis companies now attend investor events alongside big consumer products companies like Kellogg, Coca-Cola and Procter & Gamble. Ms. Azer projects that the legal United States cannabis market will grow to $80 billion by 2030, a forecast that assumes federal legalization.

Ms. Azer tracked alcohol and tobacco companies, and cannabis seemed a natural extension. “I’m just talking about them as stocks like any other stock that I cover,” she said.

For investors, it’s a two-pronged thesis. The first is that many people like recreational use. The second is that as cannabis becomes more widely used, in particular the strains rich in cannabidiol, or CBD, it is increasingly a therapeutic remedy that people substitute for pain pills, sleep aids and other pharmaceuticals. 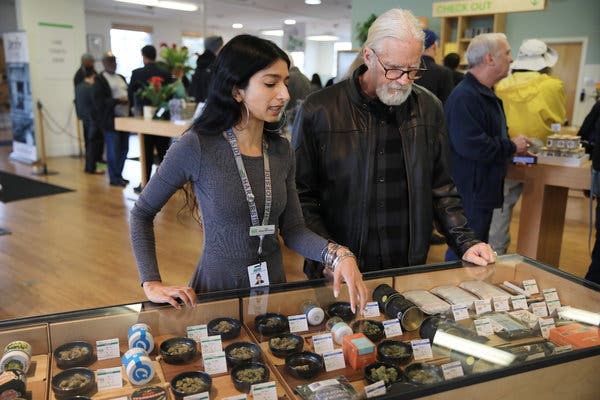 Steve DeAngelo’s website calls him the “Father of the Cannabis Industry” and has a picture of him, smiling, in what pot enthusiasts know as his trademark look of a blue fedora atop graying Willie Nelson braids that rest on the shoulders of his jacket. And there he was in the same get-up on a recent Friday afternoon, standing by a pair of A.T.M.s watching the long line of customers waiting to buy cannabis at Harborside, a cannabis dispensary and farming company that he and a partner founded in 2006 in Oakland, Calif.

Mr. DeAngelo was there to introduce Menna Tesfatsion, his company’s new chief operating officer. Whereas Mr. DeAngelo’s background includes a history of radical politics, interviews in High Times and an arrest for marijuana possession, Mr. Tesfatsion is a lawyer who worked in real estate and property development before getting into the cannabis industry.

“It’s a generational opportunity,” said Mr. Tesfatsion, who was wearing a vest, as Bay Area executives do. “We’re just beginning to scale.”

Mr. DeAngelo said the ability to attract professional managers would go a long way toward determining how well cannabis companies did from here.

“We’re the world’s best experts in cannabis,” he said of the early entrepreneurs. “But we didn’t have much opportunity to learn mainstream business skill sets like finance and compliance and marketing and real estate.”

Eager to shake the image of being high-end drug dealers, cannabis companies have become hypersensitive to anything that sounds unprofessional — hence the insistence on calling the substance cannabis instead of pot, weed or marijuana. Buds are “flower.” Hash is “extract.” Stoners are “high per-capita consumption consumers.” 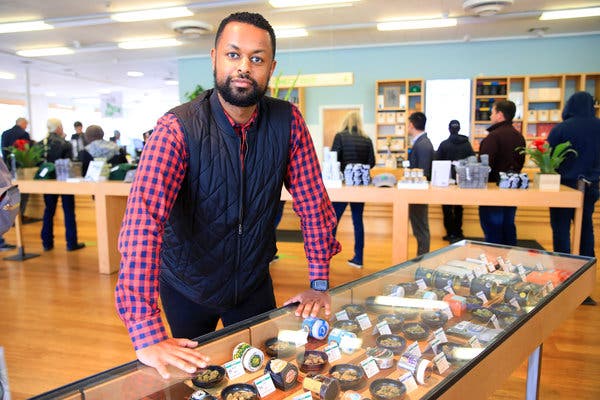 Bryan Passman, a longtime executive search consultant in Miami, recently started a cannabis-centric recruiting firm. It was originally called The Grass Is Greener Global (The GIGG), but he changed it to Hunter & Esquire because clients told him that they’d prefer he had a more professional-sounding name.

Mr. Passman advises interviewees that if they want to let a prospective cannabis employer know that they partake in the company’s product, they should avoid saying, “I like to smoke pot,” and instead try something like “I have a relationship with the plant.”

The idea, he said, is to be “purposefully subtle.”

Jobs in the industry come with a few caveats. Because cannabis is still illegal from the federal perspective, noncitizens should probably stay away for now, lest they risk their immigration status, Mr. Passman advises. If you’re collecting a federal pension, you should consult a financial adviser to see if it’s at risk. Also: Be realistic about the stigma you might face from employers in other industries.

After a decade in pharmaceutical marketing at companies including Gilead Sciences, Julie Raque recently became the vice president for marketing at Cannabistry Labs, a cannabis research and testing company in Chicago. She was intrigued by the industry and eager to join a start-up, but had to take a pay cut in exchange for company stock — and to accept that her decision might be a one-way door.

“I highly doubt companies would want to hire me back,” she said. “I knew I was about to do something big, and since then I’ve not looked back, because I’m having so much fun.”