Former House Speaker John Boehner told CNBC on Friday that U.S. lawmakers are behind the times on cannabis legalization.

Since leaving national politics in 2015, the former Republican leader has joined the board of Acreage Holdings, a publicly traded, multistate cannabis company based in New York. Acreage, though small when compared with major Canadian growers, reported last week fourth-quarter revenue of $10.5 million and full-year sales of $21.1 million, up 173 percent over the last 12 months.

Boehner was joined Friday by Acreage founder and CEO Kevin Murphy, who added that he’s optimistic both Republicans and Democrats will pass the STATES Act in 2019. The act, proposed by Sens. Cory Gardner and Elizabeth Warren, would grant individual states the power to decide whether their residents can legally possess, manufacture and sell cannabis without federal intervention. 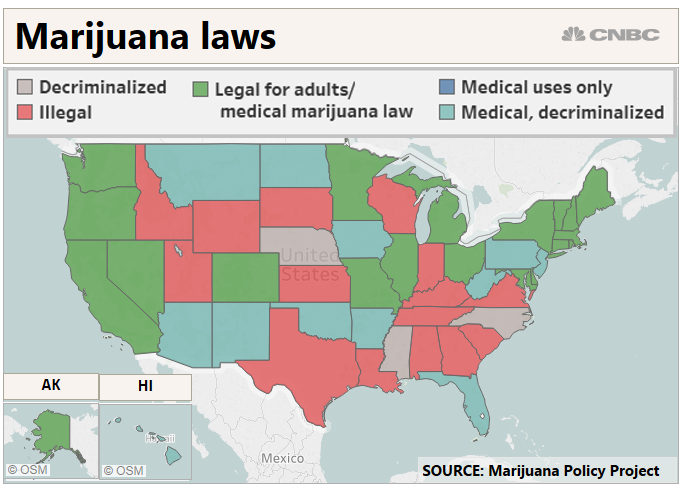 “We’re hopeful that we can appeal to both the left and the right,” Murphy said. “Ninety-five percent of this country would like to be using cannabis or believe it should be used for medical use. And with those types of numbers, we think we appeal to both the right and the left. From our vantage point, it’s just a matter of time.”

Marijuana remains illegal on a federal level in the United States, but 10 states and the District of Columbia have allowed its use for recreational purposes. Michigan in November became one of the latest states to OK recreational marijuana. New Jersey officials on Tuesday outlined plans to legalize adult use of recreational marijuana in the state.

Sixty-six percent of survey respondents now support legalizing marijuana, according to the latest Gallup poll. That’s a record high and was the third consecutive year that support for legalization has increased to record levels.

But of interest to public cannabis companies is the bill’s implications for the U.S. market for cannabidiol, a “non-psychoactive” chemical found in hemp and marijuana. CBD proponents say the compound doesn’t produce a high like marijuana but produces benefits such as anxiety relief and inflammation reduction.