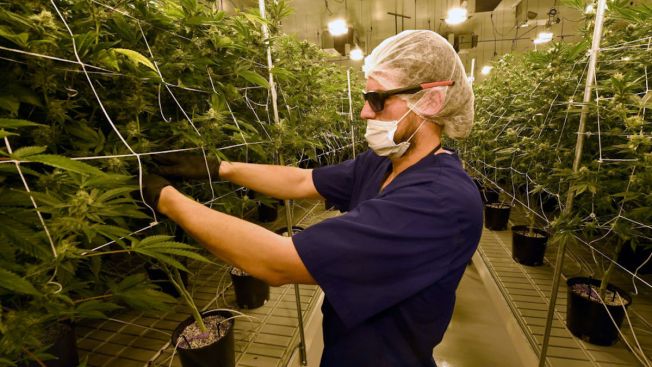 An alliance of large marijuana businesses had a message for the public Tuesday: We’re good corporate citizens.

The 45-member Global Cannabis Partnership, which includes Canopy Growth Corp. and other companies operating in the sector, issued guidelines aimed at minimizing greenhouse gas emissions and promoting ethical conduct and responsible pot use.

The emerging legal industry is “in a unique position to set a new bar for socially responsible practices,” the group’s executive director, Kim Wilson, said in a statement.

As the once-illegal marijuana economy evolves into a multibillion-dollar industry backed by a flood of investment dollars, the guidelines appeared aimed at assuring consumers that those companies are operating with public interests in mind, not just the bottom line.

Lizzie Post, the granddaughter of famous etiquette author Emily Post, is helping people navigate the new world of weed with her new book, “Higher Etiquette.” Whether it’s for casual use or a special event, Post gives advice on marijuana manners, including a guide to table setting for paired dinners and the best practices for sharing devices.

The cannabis marketplace “is Wall Street now,” said Adlai Wertman, a professor of social entrepreneurship at the USC Marshall School of Business.

The group is “saying that even though we are Wall Street, we are still aligned with the values our customers have.”

And it could have other payoffs, including potentially luring a broader range of investors for pot companies.

“Anything the industry does to show responsibility — both as an operator and to their community — is in their benefit,” said Adam Spiker, executive director of the Southern California Coalition, a cannabis industry group.

“Things like this can narrow the gap of trust between industry, community and policymakers. With more trust should come less of a perceived need to overregulate and overtax,” Spiker added.

The goal of the five-page “social responsibility framework” is for the industry to be recognized for practices in good corporate citizenship. It outlines guiding principles that include transparency and responsibility, such as prohibiting illicit sales to minors.

The group said its members have agreed to adhere to the guidelines that will set “a standard for the new and rapidly growing cannabis industry worldwide.”

While light on specifics, the document said members will develop policies to manage greenhouse gas emissions, package materials that reduce the consumption of raw materials and follow farming practices that reduce environmental effects.

Other guidelines seek to promote responsible use, education and scientific research.

Wertman noted that the guidelines steered around sticky matters like labor practices and mentioned only lightly a touchstone issue in the industry: repairing the damage from decades of tough marijuana enforcement, even for minor infractions, which hit black and other minority communities hard.

The guidelines also could help businesses gain mainstream acceptance and shake off a lingering stoner stereotype the industry has sought to escape.

Morgan Fox, a spokesman for the National Cannabis Industry Association, said the industry has an opportunity “to set the standard for corporate responsibility and build an emphasis on ethical environmental, business, and social practices into its foundation.”