Medical marijuana – or cannabis – is one of the hottest topics in oncology right now. This is especially true as more and more countries and states have legalized, or are working towards legalizing, medical cannabis. Some patient groups and alternative medicine providers view marijuana as a miracle treatment for a range of conditions. However, the research evidence for this remains unsettled. That said, there is some evidence that medical marijuana helps provide symptom relief or ease pain in patients with cancer. Following up on our popular case study on medical cannabis, in this article, I explore the current state of preclinical and clinical research on this highly controversial topic. 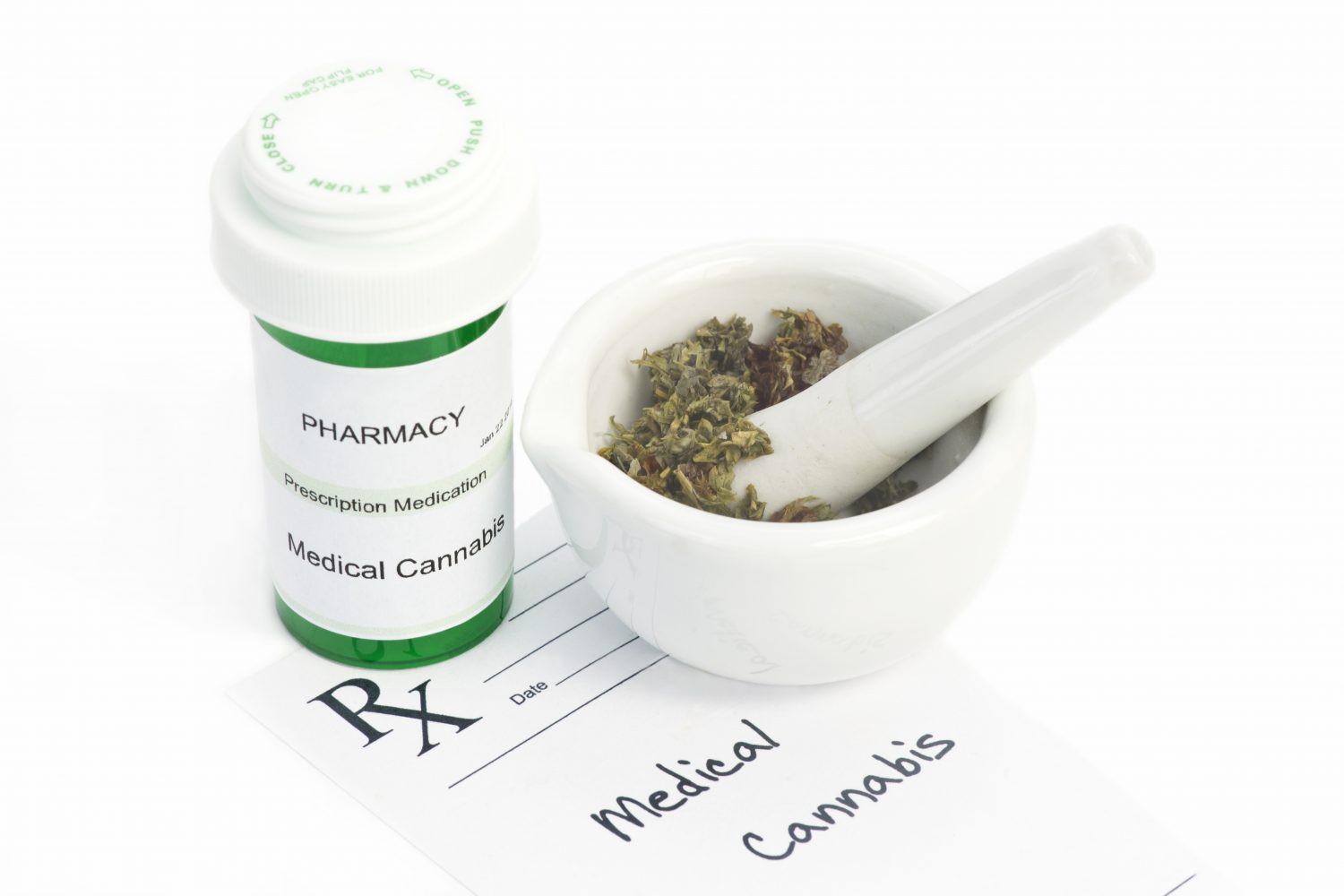 The two most well-researched cannabis compounds are delta-9-tetrahydrocannabinol (THC) and cannabidiol (CBD). These are cannabinoids – chemicals that act on certain cell membrane receptors in our body, especially in the immune and central nervous systems. THC is responsible for the “high” experienced when smoking or ingesting marijuana. In addition, it has been shown to help relieve pain and nausea. On the other hand, CBD is a non-psychoactive compound that can counteract the high caused by THC. It also lessens seizures and anxiety. Further, the pharmacokinetics, bioavailability, time course, and thereby effectiveness of cannabis also depend on how it is consumed. Medical cannabis comes in many different forms, including edibles, leaves or buds for smoking, oils for vaping or mixing with foods, topical creams, and sublingual sprays or tinctures. When ingested orally, absorption of THC occurs over several hours. Once absorbed, it is processed by the liver and produces a second psychoactive compound that then acts on the brain. If inhaled, THC enters the bloodstream and quickly enters the brain. Compared to edible marijuana, the effects of smoked or vaporized marijuana fade much quicker.

To date, only two cannabinoid drugs, both based on THC, have been approved in the US for medicinal use. These include dronabinol (Marinol®) and nabilone (Cesamet®, Canemes®), both of which can be used to treat nausea and vomiting caused by chemotherapy when other drugs do not work.

Additionally, there is nabiximols (Sativex®), an oromucosal spray comprising a formulated extract of the cannabis sativa plant that contains both THC and CBD in a 1:1 ratio, along with other minor cannabinoids and some non-cannabinoid components. Although it is available in Canada and several European countries to treat cancer-related pain, it is not yet approved in the US.

Cannabis for Symptom and Side Effect Relief Chronic pain is the most cited reason for prescribing medical marijuana. There is substantial clinical trial evidence that cannabinoids, as well as smoked cannabis, have modest effects on relieving chronic or severe pain. Additionally, marijuana may have anti-inflammatory effects that can also help alleviate pain.

Neuropathy is a common complication of chemotherapy, characterized by pain, weakness, numbness, and/or a tingling or burning sensation in the hands and feet. Medical cannabis, particularly when inhaled, has been shown to provide relief from neuropathic pain. Moreover, cannabinoids have been demonstrated to prevent chemotherapy-induced neuropathy in animal models exposed to paclitaxel, vincristine, or cisplatin.

Vomiting and nausea are common side effects of chemotherapy and other anti-cancer treatments. Several small trials of smoked medical cannabis have found it to be helpful in treating these symptoms.

In addition to cancer-related pain relief, dronabinol is also FDA-approved for anorexia associated with AIDS. However, it is not yet used for this purpose in patients with cancer. Although there are limited studies showing efficacy of medical marijuana for anorexia and cachexia, there is anecdotal evidence that marijuana may improve appetite.

Medical Marijuana as an Antineoplastic Agent

The roles of THC, CBD, and other cannabinoids in treating cancer itself are mostly speculative at this time. There is some preclinical research evidence suggesting that certain cannabinoids may slow the growth or reduce the spread of some cancers. Early clinical trials, however, have yet to show an obvious antineoplastic effect of cannabinoids.

A quick search on Google Scholar using keywords like “medical marijuana” and “cannabinoids” together with “cancer” or “oncology” produces a myriad of studies on the topic. Numerous in vitro and animal studies have shown promising results in a range of cancer types. These include glioblastoma, neuroblastoma, multiple myeloma, melanoma, and cervical, breast, testicular, and lung cancers, among others.

The proposed molecular pathways and mechanisms of action of cannabis and cannabinoids differ between the various compounds and according to the cell line used. Cannabinoids can bind to a number of receptors in the human body, including the two major cannabinoid-specific receptors CB1 and CB2. In many (but not all) tumor tissues, there is up-regulation of these receptors and their endogenous ligands compared with in non-tumor tissue. Additionally, studies have revealed associations between the expression levels of cannabinoid receptors, endocannabinoids, or endocannabinoid-metabolizing enzymes with tumor aggressiveness.

The most common effects of cannabinoids in vitro include induction of apoptosis and inhibition of cancer cell proliferation. Further, animal studies have found that cannabinoids impair tumor angiogenesis and block invasion and metastasis (summarized here). In a thorough review by the National Academies of Sciences, Engineering, and Medicine published in 2017, the committee found only one fair-to-good quality review on the anti-tumor effects of cannabinoids, and no high-quality primary studies after the publication of the review. The review article focused on cannabinoids for the treatment of glioma only, and included 35 studies – among which all but one were preclinical studies. Although all reviewed in vivo studies found an anti-tumor effect in glioma, the committee concluded that there is insufficient evidence as to the efficacy of cannabinoids for this malignancy. Nevertheless, the preclinical evidence supports the need for additional clinical research on the antineoplastic properties of cannabinoids.

As mentioned above, there is a huge unmet research gap surrounding the anti-cancer effects of medical marijuana and cannabinoids. The first ever phase I clinical trial on cannabinoid antitumoral action was published in 2006. In this pilot study, nine patients with recurrent glioblastoma multiforme, who had previously failed standard therapy and had clear evidence of tumor progression, were administered THC intratumorally. The authors concluded that THC was safe to use in these patients, with non-significant effects seen on tumor vascularisation (CD31 immunostaining) after THC administration.

Additionally, based on the beneficial effects of THC:CBD preparations (Sativex) in preclinical studies, a phase I/II clinical trial (NCT01812603 and NCT01812616) evaluating the combined effect of THC:CBD and temozolomide in patients with recurrent glioblastoma was performed. In this proof-of-concept study on 21 adult patients with recurrent glioblastoma, adding THC:CBD to temozolomide resulted in an 83% 1-year survival rate (vs. 53% in the placebo group; p=0.042). As of 2017, the median survival rates for the two groups were >550 days vs. 369 days.

Multiple reviews on the anti-cancer activities of cannabinoids have been conducted (see for example Abrams 2016, Śledziński et al. 2018, Velasco et al. 2016, Wilkie et al. 2016). All of these have one thing in common: they conclude that there is a need for additional preclinical – and especially clinical – studies in various cancers.

Moreover, there is some preclinical evidence that cannabinoids can work as sensitizers to improve the effects of other cancer therapies. Thus, there is a need for both in vitro and clinical studies on combination therapies of THC, CBD, and/or other cannabinoids with chemo-, radio-, or targeted therapies. Potential drug-drug interactions and biomarkers to determine which patients are most likely to respond and benefit from cannabinoids also need to be examined. To identify biomarkers, there is a need for high-throughput approaches in tumor or liquid biopsies.

Importance of Big Data for Shaping the Future of Medical Cannabis

It is still early days for medical cannabis in oncology, and many questions remain. Which strain or compound is most effective for which condition? What is the optimal mode of delivery? What is the appropriate dose and dosing frequency? Clinical trials are not able to answer all of these questions; to do so, there is a need for real-world evidence and “big data.”

Big data will help take the guesswork out of prescribing medical marijuana by allowing analyses of the most effective strains and doses for different cancers and cancer-related symptoms. Accordingly, companies looking to be leaders in this field need to collect, share, and analyze prescription and outcome data to guide their future research and marketing directions.

Barriers to Medical Cannabis Research and Use

In addition to the need for big data collection and analysis, there are other important barriers to research into medical cannabis. Importantly, in the US, the FDA has not approved medical marijuana for the treatment of any condition. In fact, cannabis is classified as a schedule I drug, along with heroin and MDMA. Thus, despite a growing number of individual states legalizing medical marijuana, getting approval for clinical studies is a long and difficult process. In turn, researchers are unable to perform the high-quality research required for FDA approval and to clarify the benefits of cannabinoids. US states where medical marijuana is legal. Source: https://www.cancer.gov/about-cancer/treatment/cam/hp/cannabis-pdq#section/all

Another important barrier to widespread and appropriate medical marijuana use is a lack of knowledge among physicians and other healthcare professionals. A recent survey found that, although as many as 80% of oncologists talk to their patients about medical marijuana (usually when brought up by the patient or their family), less than one-third feel that they have enough knowledge to advise about its therapeutic use. Together, this suggests an important knowledge gap.

Overcoming the Barriers – The Impetus Solution

As identified above, some of the major barriers to the widespread use of medical cannabis in oncology include the needs for: The Current State of Evidence and Recommendations for Research. Retrieved from https://www.nap.edu/read/24625/chapter/6