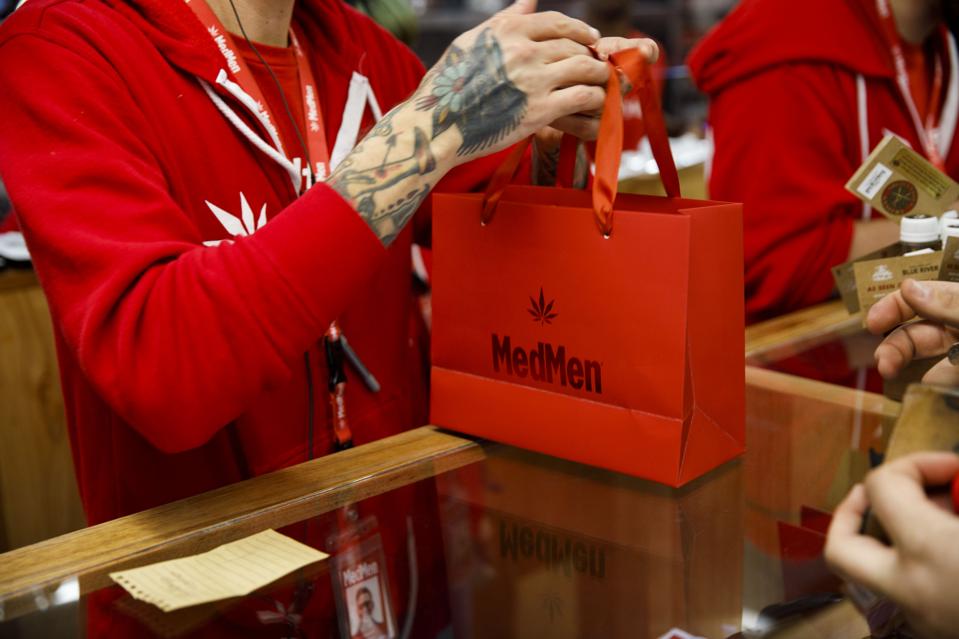 An employee hands a customer a shopping bag at the MedMen dispensary in West Hollywood, California, U.S., on Tuesday, Jan. 2, 2018. California launched legal marijuana Monday, and customers lined up to celebrate the historic moment in San Diego, Sacramento and Oakland — some of the municipalities given the green light to start sales on January 1. Meantime, in Los Angeles and San Francisco, the state’s first- and fourth-largest cities, customers were turned away empty handed. Photographer: Patrick T. Fallon/Bloomberg

When California legalized at the beginning of 2018, there were few options for investors  in public companies to participate.  Terra Tech was the only publicly-traded company that actually held a license and that was generating revenue at that time, while Origin House (then CannaRoyalty) had begun to assemble some assets and had just announced a strategic change to focus on the state. Today, though, the choices have expanded dramatically, with many of the largest multi-state operators (MSOs) targeting the state for expansion. Just this past week, Pasadena awarded six retail cannabis dispensary licenses, and MSOs snagged three of them, with Green Thumb Industries, Harvest Health and Recreation and MedMen among the winners. Given the increased focus on the state as it moves beyond the early days of legalized cannabis and a more highly regulated medical cannabis market, it’s a great time to review some of the publicly-traded companies that are active in California.

Acreage Holdings entered the California market through acquisitions. It has a pending deal to acquire Oakland dispensary Kanna, for $11.5 million in stock. It also purchased Form Factory, a manufacturer, co-packer and distributor based in Oregon that is expanding to California.

Cresco Labs owns 80% of a  cultivation operation in California that it reports can produce over 182,000 pounds per year, but what will make it a leading player in the state is its pending acquisition of Origin House, which I discuss below. Cresco announced the deal in April, and it will be acquiring each share of Origin House by issuing .8428 shares of Cresco Labs in exchange. The  closing price of Cresco Labs on the Canadian Securities Exchange on June 7th was C$13.55, which would imply a price of C$11.42 for Origin House, which closed at C$10.26, a discount of 10.1%.

Curaleaf Holdings has operations in California, but its pending acquisition of Cura Partners, will dramatically increase the MSO’s exposure to the state. The company reports that Cura Partners has 25% share of its cannabis oil market. In December, it received a manufacturing, distribution, and mobile dispensing license from the City of Davis and is commencing operations this month. In March, it acquired Eureka Investment Partners, which has a cultivation facility in Monterey County as well as three dispensaries.

DionyMed Brands operates in Oregon, Nevada and Massachusetts, but California is its largest market. The company owns and distributes brands and also operates a delivery service. It also has a pending $18 million acquisition that would give them a dispensary, distribution facility and direct-to-consumer distribution business in Southern California as well as an option to buy an indoor grower in Oakland. The company generated sales of almost $20 million in Q1.

Green Thumb Industries recently closed on the acquisition of Integral Associates, which has given them a position in California. Integral operates the Essence retail stores in Nevada but it is expanding in California, winning licenses in Pasadena and in West Hollywood, where it will operate one of just five stores with consumption lounges. In February, GTI bought For Success Holding Company, the creator of high-end Beboe branded products that are sold in California as well as Colorado.

Halo Labs has generated most of its revenue to date in Oregon, but the company recently began manufacturing and selling cannabis concentrates and oils in California. It has a 15K sq. ft. facility in Cathedral City that it reports can produce 12,000 grams per day and has named two customers in the state.

Harvest Health and Recreation is pursuing California aggressively, opening dispensaries on its own but also engaging in M&A. The company opened a retail store in Napa and lists six other locations on its website that will open soon. In February, it announced the pending acquisition of Falcon International, which holds 16 licenses in the state for cultivation, manufacturing and distribution.

MedMen operates in many states, but it is based in California, and the bulk of its current substantial revenue is generated in the state. It continues to expand its presence there as well. In addition to winning the retail dispensary license in Pasadena, it announced a dispensary acquisition in Long Beach, agreeing to pay $13 million, mainly in stock, to acquire One Love Beach Club, which reported sales of approximately $6 million in 2018.

Origin House, which in almost all likelihood will be acquired by Cresco Labs later this month, shifted focus in late 2017, becoming an operator rather than an investor. The company’s primary geography is California, where it operates five licensed facilities and distributes branded products. It’s California operations generated C$9.3 million in revenue in Q1. As I noted above, the stock trades at a discount of more than 10% to the price implied by the Cresco Labs acquisition.

Planet 13 Holdings has performed exceptionally well in Nevada, and the company announced in early June that it will enter the California market through the $10 million acquisition of a dispensary in in Santa Ana that is not yet operational.

Plus Products is a recent IPO on the CSE. The company has developed leading share in the edibles market in California with its 4 SKUs of gummies, and it recently introduced mints. IT acquired  Good Co-op in December and will produce baked goods from a facility in Sacramento.

Sunniva has been delayed in the construction of its massive cultivation facility in Cathedral City, but the company, which is exiting its Canadian operations to focus solely on California, booked over C$10 million in California revenue from branded products in Q1.

Terra Tech has been an operator in the state since it acquired Blum in early 2016. Then Blum was operating only in Oakland, but today it has retail dispensaries in Southern California as well. Unlike every other company included in this article, it trades on the OTC exclusively, while the others are listed on the OTC but also have a primary listing in Canada.

TerrAscend is a Canadian LP that has recently entered the U.S., winning a license in New Jersey and acquiring Apothecarium, a San Francisco cannabis operator, for $118.4 million. Apothecarium generated revenue in California and Nevada in excess of $45 million in 2018, and TerrAscend is projecting its overall revenue in 2019 to be C$135 million.

Trulieve, a powerhouse in Florida, purchased a dispensary in Palm Springs in November for about $4 million. The company is using its dispensary to learn about the supply chain and the market in the state, and investors should expect the company to expand further over time.

Disclaimer: I mentioned Cresco Labs, Plus Products and TerrAscend, which are clients of mine at New Cannabis Ventures, where we provide investor dashboards on their behalf. We disclose all public company clients here. I do not own any stocks mentioned in this article, though I may include them in one or more model portfolios at 420 Investor.