Dennis Hunter spent six and a half years in federal prison for growing cannabis.

“I ended up going on the run, looking at a really long sentence,” said Hunter. “I was a fugitive for about four and a half years and then they caught me.”

Today, Hunter is the CEO of CannaCraft, the Santa Rosa, California-based company that makes some of the most popular products available for sale at dispensaries across California. There’s absoluteXtracts, a leader in strain-specific, high THC cannabis oil. Then there’s Care By Design, the brand name for a variety of CBD-rich products, as well as Satori, an edible line. The CannaCraft facilities sprawl through a suite of corporate offices, raw manufacturing space, packaging floors, and distribution warehouses. It’s as much a pot-lover’s paradise as a pantheon to engineering, technology, and efficiency. 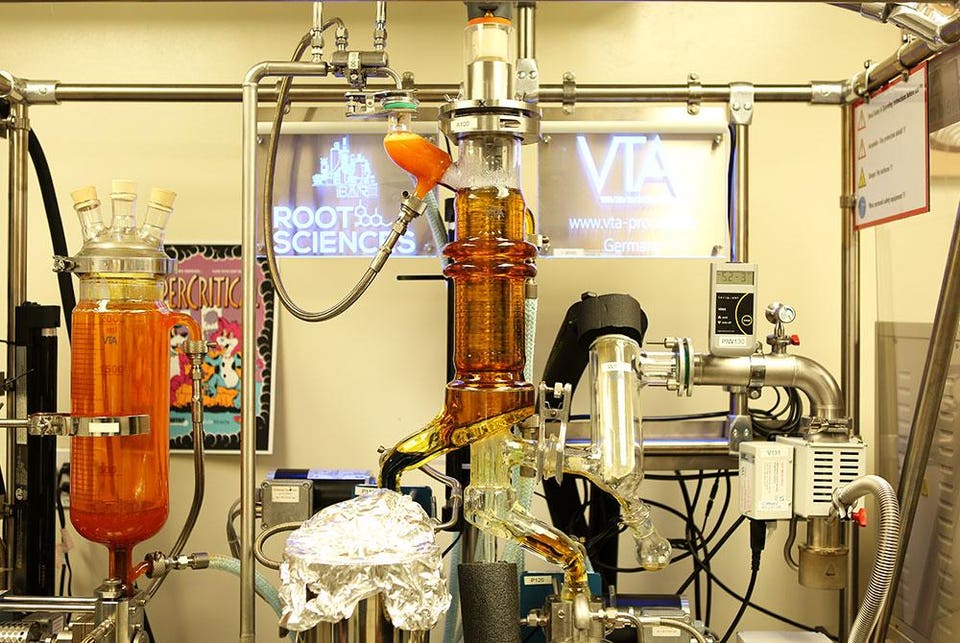 Oil at CannaCraft. by  JOHN PARADISO

“When I got out of prison, I knew I couldn’t keep growing cannabis, because I’d go away for life,” said Hunter. “I started a hydroponic business where I had all the equipment for those that could grow. But when I got off probation, I could see where things were going. So I said, ‘Okay, I’m going to do it right this time.'”

If it seems unlikely that a convicted felon would co-found one of the country’s biggest cannabis companies, that’s because you don’t know Dennis Hunter. The affable Hunter is a fixture in the industry, having won The High Times 100 Award for two years running, and he’s clearly passionate about his brand and product.

“All my intentions were to do it right,” said Hunter. “We were self-regulating ourselves before the rules were there.” 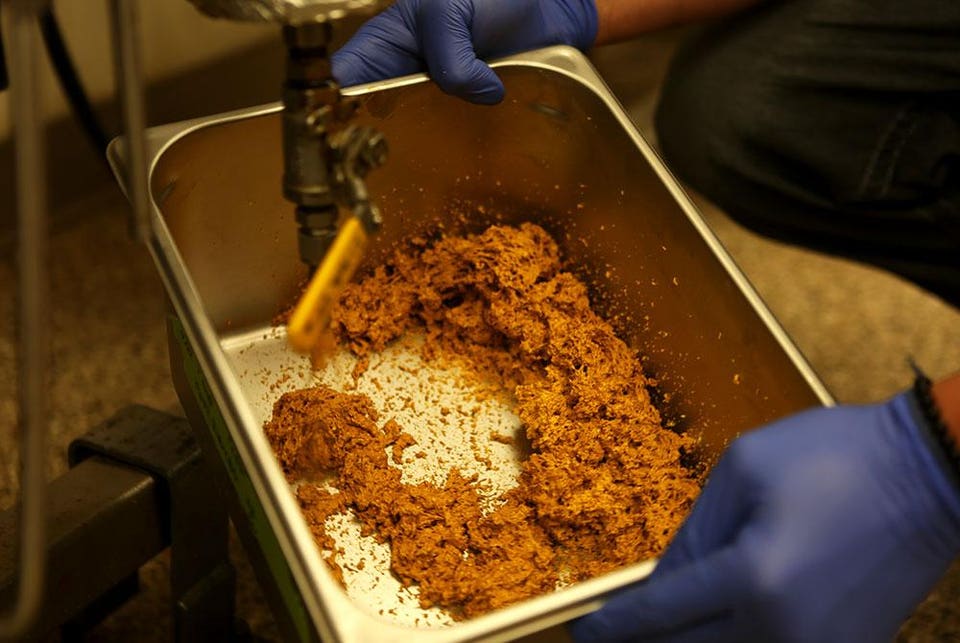 A CannaCraft employee pulls from a CO2 extractor. by  JOHN PARADISO

The lobby of CannaCraft leads to a holding room for 23 Super Critical CO2 extractors, the same machines that are used to decaffeinate coffee or extract oil from botanicals, like lavender. At 600 PSI and just below freezing temperatures, CO2 becomes a liquid and gets pumped through one of the machines.

Just before it hits the cannabis plant matter, the machines pressurize the liquid CO2 to 2,000 PSI and warm it to 110 degrees. That makes it “super critical” — between a liquid and a gas. In that state, it’s extremely unstable and very good at removing oil from leaves as it moves through the cannabis biomass.

After that, the pressure gets lowered and the CO2 turns back into a gas. When it’s in a gas state, the CO2 can’t hang onto the oil, so all the oil ends up at the bottom of a holding vessel, while the CO2 moves back through the system to be used again. The oil that comes out of the Super Critical CO2 extractors looks like soft serve ice cream. 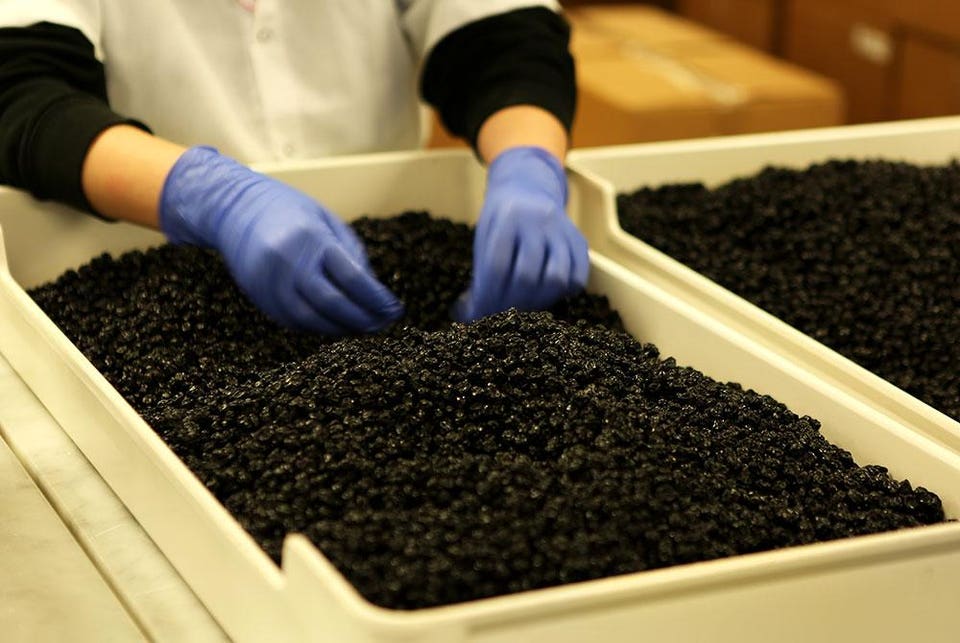 An employee at CannaCraft picks apart blueberries for use in Satori edibles. by  JOHN PARADISO

The facility moves $8 million worth of inventory every thirty days. It’s one of maybe a dozen facilities in California with the same scale of production, with perhaps another hundred or so that replicate one piece of CannaCraft’s total business.

One of CannaCraft’s newest ventures is Hi-Fi Hops, a cannabis-infused sparkling water that they make with nearby Lagunitas Brewing Company. CannaCraft has an entire wing of their facility dedicated to the partnership, complete with six tanks and a bottling line. The base for the product is the Lagunitas-produced sparkling water called Hoppy Refresher, which the brewery drives in from Petaluma. CannaCraft then infuses the water with cannabis, bottles it, and delivers it to accounts around the state. 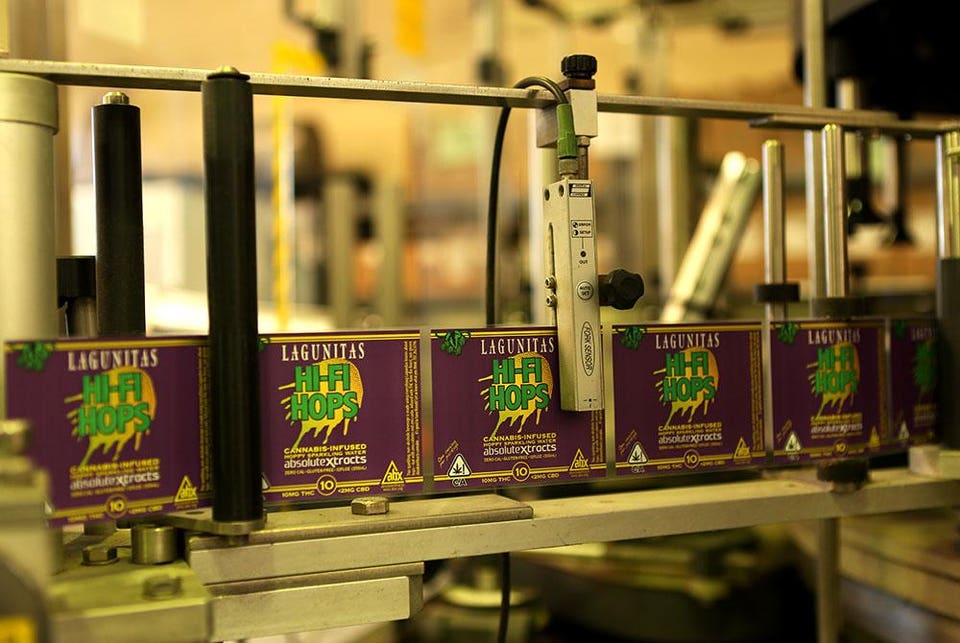 Hi-Fi Hops, a THC-infused collaboration between Lagunitas and CannaCraft. by  JOHN PARADISO

I had an opportunity to try both Hoppy Refresher and Hi-Fi Hops. The Hoppy Refresher is simply sparkling water — no psychoactive properties there. It’s got a light citrus flavor and tastes quite good. The Hi-Fi Hops tastes the same, though it contains THC. CannaCraft makes two versions, one with 10 milligrams of THC and one with 5 milligrams of THC and 5 of CBD. The latter gave me the same relaxed, comfortable buzz that one might expect from consuming a THC-infused edible.

The history of cannabis has been one of stigma, prohibition, and incarceration. However, as the industry continues to evolve, advocates like CannaCraft are proving that the industry can be regulated and producers held responsible, just like it’d be for any other consumer good. Their facility is not only clean, efficient, and professional, but also a hell of a lot of fun, and almost assuredly the coolest tour you’ll take all year.