Curious about the status of cannabis? Here’s a map of where marijuana legalization stands across the country — and a deeper look into some places with disparate approaches to pot 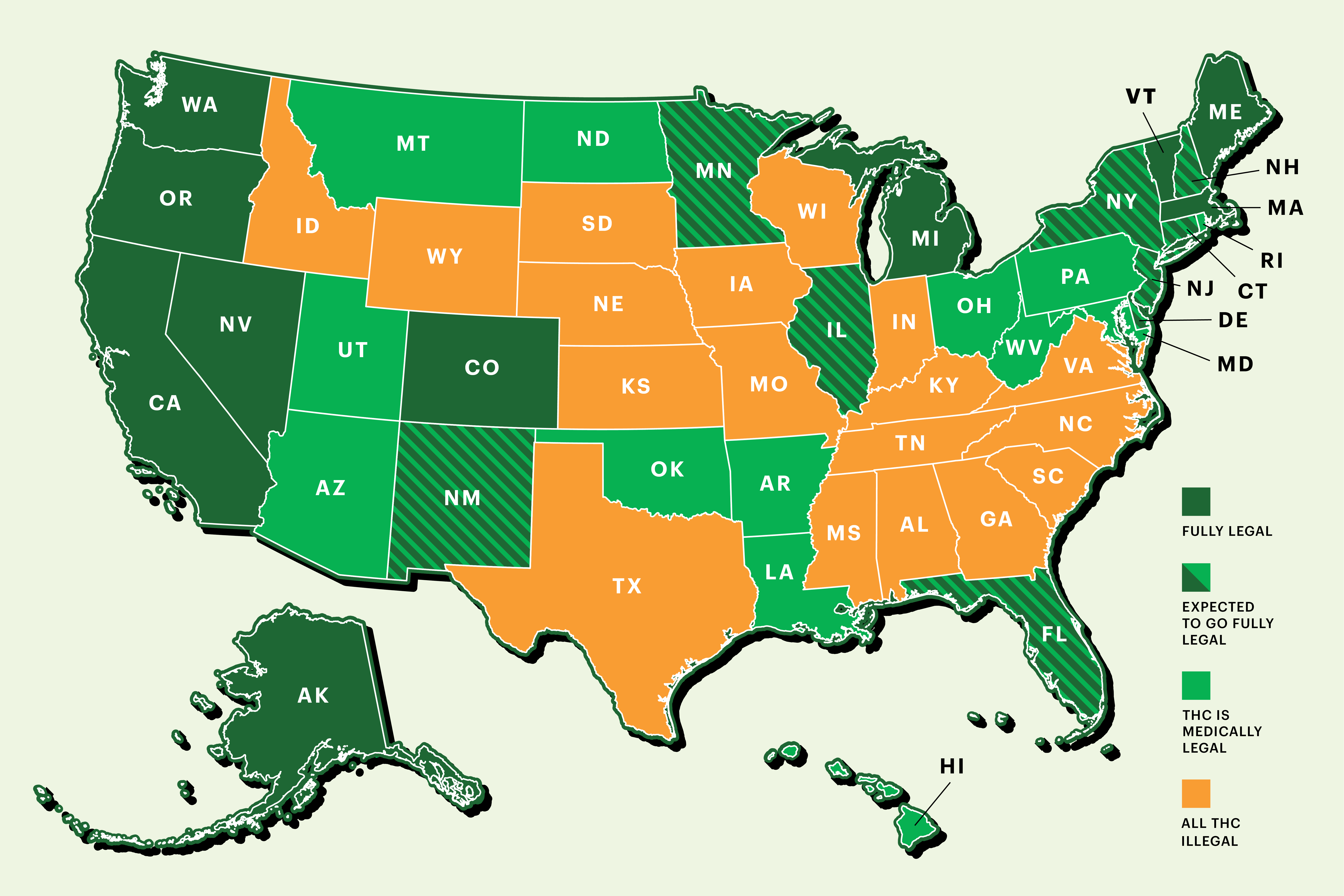 The country is moving forward with legalization at a record pace — but what that actually means can vary wildly from state to state. Some that are “medically legal” consider limited access to CBD to be enough, while others allow full ­recreational use, offering all forms of THC-rich, psychoactive products to anyone over 21. And then there’s Alabama. Here, a breakdown of what’s legal, what’s not, and where you should be looking next.

ALABAMA
Alabama was called out by the Southern Poverty Law Center for having “draconian” laws, including giving prosecutors the option to charge almost anyone caught with weed with felony distribution. As of 2016, black ­people were almost four times more likely to be arrested for possession than white people — and in some parts of the state, that factor jumped to 10.

Alaska has the smallest annual sales of any recreational state — but when on-site consumption goes into effect later this year, many are hoping cannabis cafes and 420-friendly hotels will turn their pot industry around.

CALIFORNIA
Home to the country’s first dispensary — San Francisco Cannabis Buyers Club, opened in 1992 — the state is now at the forefront of marijuana cafes: Already in San Fran, they open in West Hollywood this summer.

FLORIDA
With 190,000 medical cardholders so far — and its recent decision to allow smokable flower — ­Florida’s medical program is expected to grow, especially among the aging boomer population. But the biggest change will come if voters approve a possible 2020 ballot initiative to fully legalize the plant.

ILLINOIS
As of this writing, the Land of Lincoln has all but legalized. A massive bill passed both chambers of the state legislature is sitting on the desk of Governor J.B. Pritzker, who has vowed to sign it into law, which would make it the first state to establish a cannabis market not by ballot initiative. Once it goes into effect, the bill would make cannabis recreationally legal for anyone 21 and over — though as some advocates have pointed out, it does a disservice to constituents by not offering

MASSACHUSETTS
The state, which has a program to ensure jobs and tax revenues are split up fairly, is poised to be one of the fastest-­growing markets this year. But since dispensaries began rolling out last November, only a few have opened — and they’ve been plagued by long lines and lack of product, driving many to the illicit market.

NEW JERSEY
In March, Democratic lawmakers — encouraged by Gov. Phil Murphy — almost brought a progressive bill to a vote but were forced to call it off, in part because of a criminal-record-expungement program that would have wiped convictions for anyone previously caught with up to five pounds of weed, a step too far for some legislators.

NEW MEXICO
New Mexico has a booming medical market — 90 dispensaries and counting — and the state just became the 24th to decriminalize. It also had a novel idea to establish a system of state-run recreational dispensaries, and although that bill stalled in the state Senate, it’s expected to be reintroduced in 2020.

OKLAHOMA
Recreational use remains off the table for now, but Oklahoma is rolling out a comprehensive medical program — and doing it in record time. Less than a year after voters approved the measure in June 2018, more than 650 dispensaries are already licensed.

OREGON
When Oregon legalized in 2014, it overestimated demand. Though it has over 600 dispensaries — more than any other state — since pot can’t legally move across state lines, growers are stuck with more than a million pounds of excess product to sell or destroy.

WASHINGTON D.C.
Though D.C. voted to legalize in 2014, the city never OK’d retail sales. Instead, gray-market pop-ups add bud as “gifts” attached to other products, like snacks or T-shirts. But in the nearly one-third of the city that’s federally owned, restrictive pot laws still apply.

WYOMING
Wyoming has some of the most severe cannabis laws in the U.S., with the highest per-capita rate for marijuana arrests. And even though a medical-­marijuana program is still a pipe dream, cannabis leaders see a hemp bill that was signed into law in March as a mark of progress to come.

Correction: The map in this post has been updated fix a mis-labeling. It has been corrected to accurately show that states labeled orange are where THC is fully illegal.