The state’s weed earnings are falling short, but there are local success stories 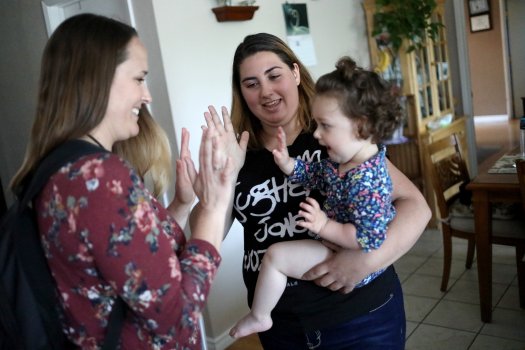 Drug abuse prevention, public safety, protecting the environment, economic development — these were some of the visionary promises that legalized cannabis would pay for.

Now, 1 1/2 years after the start of legal sales, the lofty goals of Prop. 64 remain only partially fulfilled, deferring the dream of funding major new social programs.

In order to collect the $1 billion a year in state tax revenue promised by backers of the initiative, plus millions of dollars more for cities and counties, California needs to sell at least $7 billion worth of weed. Last year, $2.5 billion was sold.

Hampered by a slow start and strict rules required by the initiative, the state has put a regulatory structure in place. But much else is still on the drawing board.

Only an estimated one-third of communities allow sales — and most deposit their new tax revenues into a general fund, to be spent on everyday needs, rather than special projects. Two-thirds of California’s communities aren’t getting any direct revenues, at all, because they’ve rejected cannabis businesses.

There are a few notable exceptions, according to a Bay Area News Group analysis, where governments are creating success by moving quickly to license businesses, listen to public concerns and target specific needs.

“It’s helping people,” said Cecilia Mendoza, 21, of Santa Cruz, where cannabis taxes pay for visits to her home by a trained nurse to monitor her mental and physical health, so the young mother can stay committed to working, community college and care of her lively toddler. “It’s not the drug dealers who have the money. The county can actually use it.”

Oakland’s Alphonso T. Blunt, Jr. will apply for a city-backed loan, supported by cannabis taxes, to boost his new dispensary Blunts + Moore. A native of East Oakland, he applauded the city’s interest in helping him realize his lifelong dream of running a successful business, he said.

“In certain localities, there is a moral conscience, so the taxes are spent that way,” said Robert Harris, a policy adviser and lobbyist for the California Society of Addiction Medicine. “In other areas, taxes just go wherever.”

A big part of the 2016 pitch to California voters to legalize recreational marijuana: The tax money would fix problems.

“The revenues,” the initiative read, “will provide funds to invest in public health programs that educate youth to prevent and treat serious substance abuse, train local law enforcement to enforce the new law with a focus on DUI enforcement, invest in communities to reduce the illicit market and create job opportunities, and provide for environmental cleanup and restoration of public lands damaged by illegal marijuana cultivation.”

Legalization would create $1 billion annually in new state revenue, promised the Yes on Prop. 64 campaign. There would be a windfall for counties and cities, as well, it said.

Projected revenues fell to $630 million in Gov. Jerry Brown’s budget for the first year of commercial sales. But only about $345 million actually arrived.

But the latest estimates, contained in the May 1 budget revision, scale back revenues much further: $288 million in 2018-19 and $359 million in 2019-20. This represents hefty cuts of 23 percent and 43 percent, respectively, from January’s forecast.

Where does the money go? Taxpayers say they’re frustrated.

“It’s not clear. There is no transparency,” said Concord’s Greg Kremenliev, 71, a retired insurance salesman and cannabis activist. “I couldn’t tell you how the first nickel gets spent.”

The state responds that its top priority, under the terms of the initiative, is paying the $28 million needed to regulate a long-illicit drug. The cost will soar to $44.5 million next year.

The second tier of funding goes to several promised grants, such as $10 million for cannabis social equity programs and $10 million for university research. But the rollout of those projects has been delayed, with no funds yet distributed.

There’s been nothing left to pay for the discretionary programs — last in line for funds – to prevent youth drug abuse, protect the environment and help law enforcement.

If all goes well, these programs are slated to get $198 million in funding next year.

“This is not the start that treatment people or prevention people wanted. But the market has got to straighten itself out,” said Harris.”Once it does that, and the market matures, there will be a ton of money for kids’ stuff.”

“This gives us time to plan for spending,” he said.

There are many reasons behind the lackluster figures.

Some critics blame the excessive taxes and regulations associated with running a cannabis business, saying it keeps the illegal pot market booming. Prop. 64 was supposed to generate as many as 6,000 cannabis shops in the first few years; so far, only 952 licenses have been issued. That means less tax revenue for both the state, counties and cities.

Many municipalities — such as Contra Costa, San Mateo and Santa Clara counties, along with a multitude of cities — have been reluctant to accept legal cannabis. These governments just levy a regular business tax from approved dispensaries in their cities.

Some permissive counties have delayed implementing a cannabis-specific tax. Alameda County hopes to get a tax on the ballot in 2020. San Francisco voters passed a tax last November, but it won’t start until 2021. A few cities that have approved cannabis sales are still getting their footing, and haven’t reported tax revenues.

But there are success stories in pot-friendly municipalities and counties, which have realized the greatest relative windfalls.

Nobody comprehensively tracks figures, but interviews show that during the 2017-2018 fiscal year Berkeley has reaped $1.23 million; San Jose, $13 million; and Richmond, $971,000. The cannabis money goes into general funds, tackling a litany of local concerns.

Humboldt County is reinvesting a portion of its $10.3 million in tax revenue back into the industry, awarding grants and creating a marketing plan to promote the region’s cannabis.

Oakland’s tax has yielded $13.7 million for the general fund, of which $3.4 million goes toward technical assistance and the revolving no-interest loan program for low-income cannabis “equity applicants.”

“Education and funding are the key to success,” said Blunt, whose East Oakland dispensary is the first in the United States to open under a social equity program. He hopes to apply for a $100,000 no-interest loan to help his business, which cost $3 million to launch.

Santa Cruz County developed a program called “Thrive By Three,” where $350,000 in cannabis revenues help low-income parents and their children.

It pays for nurses such as Justine Wiley of the county’s Nurse-Family Partnership program, who travels the long coastal stretch between Davenport and Pajaro to help 25 first-time mothers.

“You name it, we do it,” Wiley said. “If a mom’s in danger of losing her home, we make sure she’s not out on the street. If there’s domestic violence, we do safety planning. If she’s in relapse from drugs, we reach out about treatment centers. We ask: ‘What do you need? How can we support you?’”

a recent sunny afternoon, Wiley sat with a weary Mendoza and toddler Lilah to help brainstorm how to get more sleep, find free clothing, eat healthy, complete college and juggle appointments to the dentist, lawyer and pediatrician.

“She’s like family,” said Mendoza. “I was worried about how I was going to be as a mom. And having her come in the household and reassuring me was super helpful.”

In Monterey County, cannabis is generating an estimated $11.3 million in tax revenue. After setting aside $5.2 million to license and regulate businesses, the county asked residents to list their priorities. It put money in a “rainy day” reserve fund, then paid for specific projects to help the homeless, including an event to help veterans get free legal, medical and other services.

“We listened to the community,” said county spokesperson Maia Carroll.

“They wanted the money to mitigate what might be negative effects of legalization,” she said, “but that it might also be positive, helping people who might not otherwise be helped.”